Girl with a pink dupatta 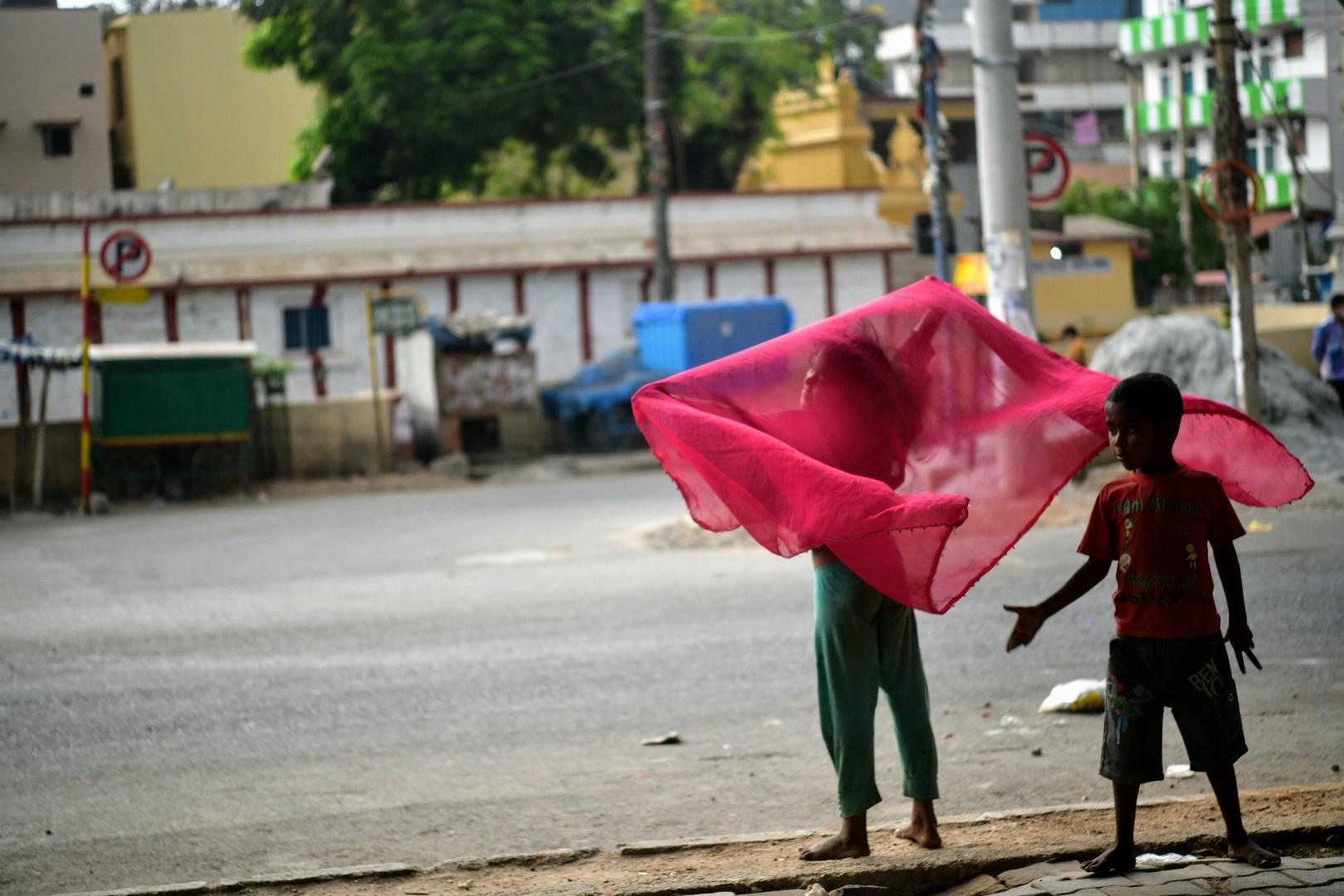 Life of a photojournalist hasn’t been easy during this lock-down. Someone once told me that photojournalists are a solitary breed and his words have proven to be true. I haven’t met a single journalist on the field trying to keep myself safe from the virus while I do my job. Every night I stay up wondering what the next day has in store for me and every morning I take off on my two-wheeler in a new direction with the hope of finding something worthy to report and visually. 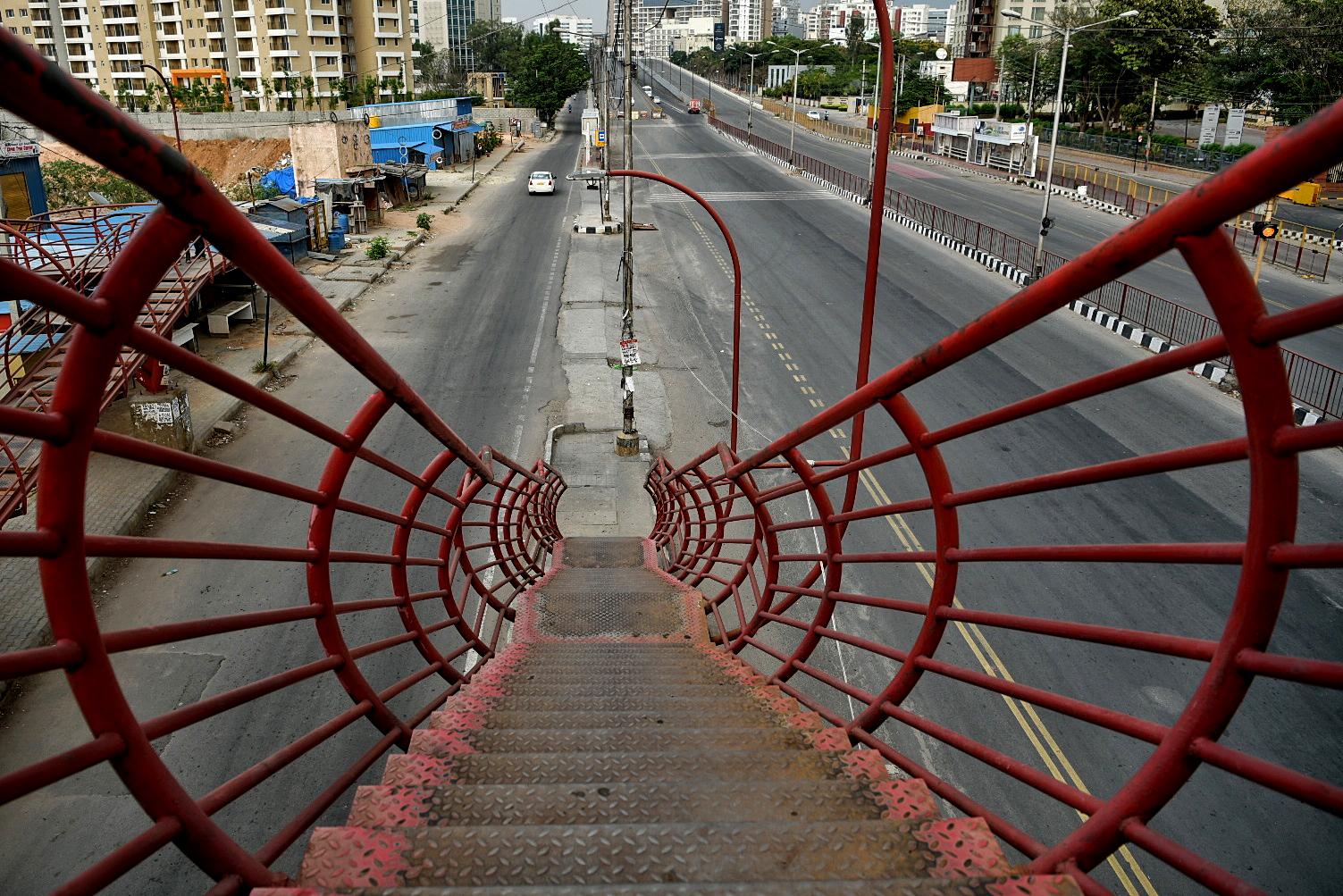 6th April was one such day when I took off towards Silkboard and decided to cover the outer ring road which is otherwise a nightmare. I have always joked saying I do not even sleep with my head in that direction. The silence was eerie and I barely managed to get four mediocre pictures. After riding aimlessly for two hours I was passing by a friend’s place and rung him up to say hi across the compound and take a much needed break. He said "don’t be silly, come home and wash your hands, let me give you something to eat and a cup of black coffee". Those words sounded like music to my ears. After a lot of thought, I gave in and took off again after I got my rest. It was 4:00PM by then and the light was lovely to photograph in. I lost my way and ended up taking the same route back instead of doing the entire circuit. I stopped at the beautiful foot over bridge outside Eco Space which I wouldn’t have noticed on a regular day and the word 'beautiful' isn’t something people would associate with that side of the city, the word usually is 'stress’. I photographed the empty road from the bridge and people using the foot over bridge to take pictures, and left with a smile as I had some decent pictures to file for the day. People who later saw the picture were in awe that a place where people take hours to move a few inches was empty and how pretty that FOB looked. Someone said "I thought it’s a roller coaster and had to give it a second look". 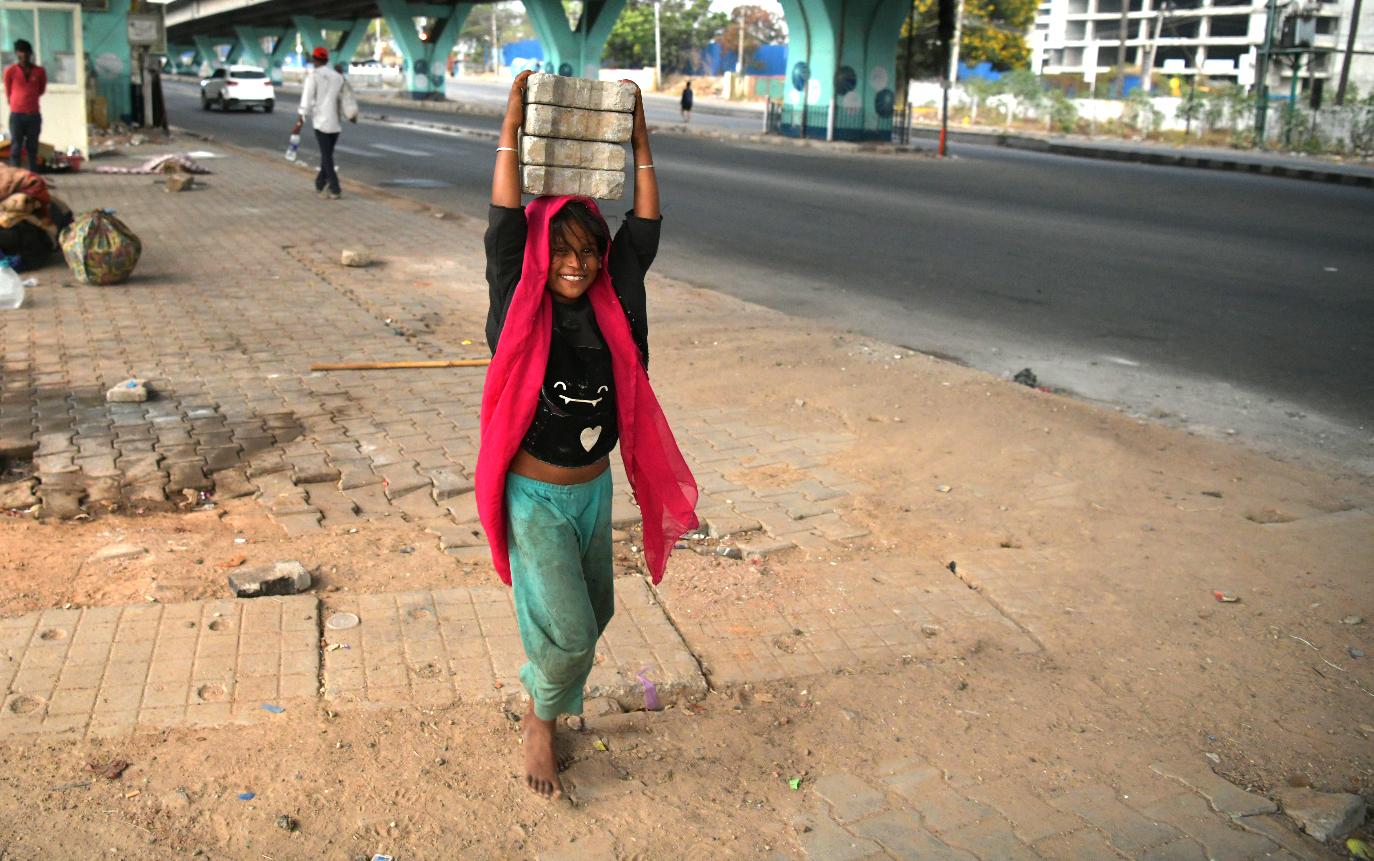 As I was heading back home, it was close to sunset with a cool breeze. It was at that moment that I was passing by a flyover and under it I noticed the silhouette of a girl and a pink dupatta in the air beaming with a smile. I knew right then, that this was the moment of my day. It was the same family I had seen a few days earlier. I stopped and quietly pulled out the camera and started photographing her. It wasn't long before the children noticed me and came running to me to check out the pictures. I kept them at a distance and turned the LCD screen of my camera towards them. Excited, they ran back and continued playing. Their toys were a pink dupatta and some cement bricks. Children took turns carrying those bricks on their heads pretending to be construction workers. It struck me then, that every child plays house but what they pretend is what they see. Most of us who come from privilege have pretended to be teachers or doctors while these kids pretend to be construction workers as most men in these families of migrant workers work in construction and women as domestic help. These hardships seem fun to these innocent kids. I then had a quick chat with a lady of this family asking them if food and other necessities are reaching them and she said "people have been feeding us and we have bedding with us. What we want, is to go home." She asks "sister, when will the borders open? We want to go home, we come from U.P and it's a long way from here, we cannot walk all the way especially with the kids." I had to break it to her that the wait is long but they will be taken care of. The little boy comes up to us and says "I haven't had milk in many days now, where can I find it?" I then told a few people I knew who volunteered at many places to help these kids. I decided to go back and check on them in a few days. However, it took me a lot longer to return and the day I did, voila some BBMP officials had reached with a KSTDC van to provide shelter to the homeless by shifting them to government hostels. I then intervened to help overcome language barriers telling the family that the BBMP officials will take good care of them by providing them food, shelter and a hygienic place to stay. They agreed to go with the officials. The girl with the pink dupatta was wearing a pink top and instantly recognised me, she smiled, pointed her finger at me and said "photo". They all then queued up and the officials started teaching them how to sanitise their hands, noted down their details before the migrant workers boarded the bus. The girl peeped out of the window, smiled at me and off they went. I didn't get to ask her, her name, age or anything but this girl and her smile are etched in my memory.

I felt like I was destined to follow this family, what are the odds that the day I return to check on them is the day they are being moved. This lock-down has put a lot of things in perspective and is definitely making people think, analyse and reprioritise. I for one have definitely learnt a lot photographing migrant workers through this lock-down. 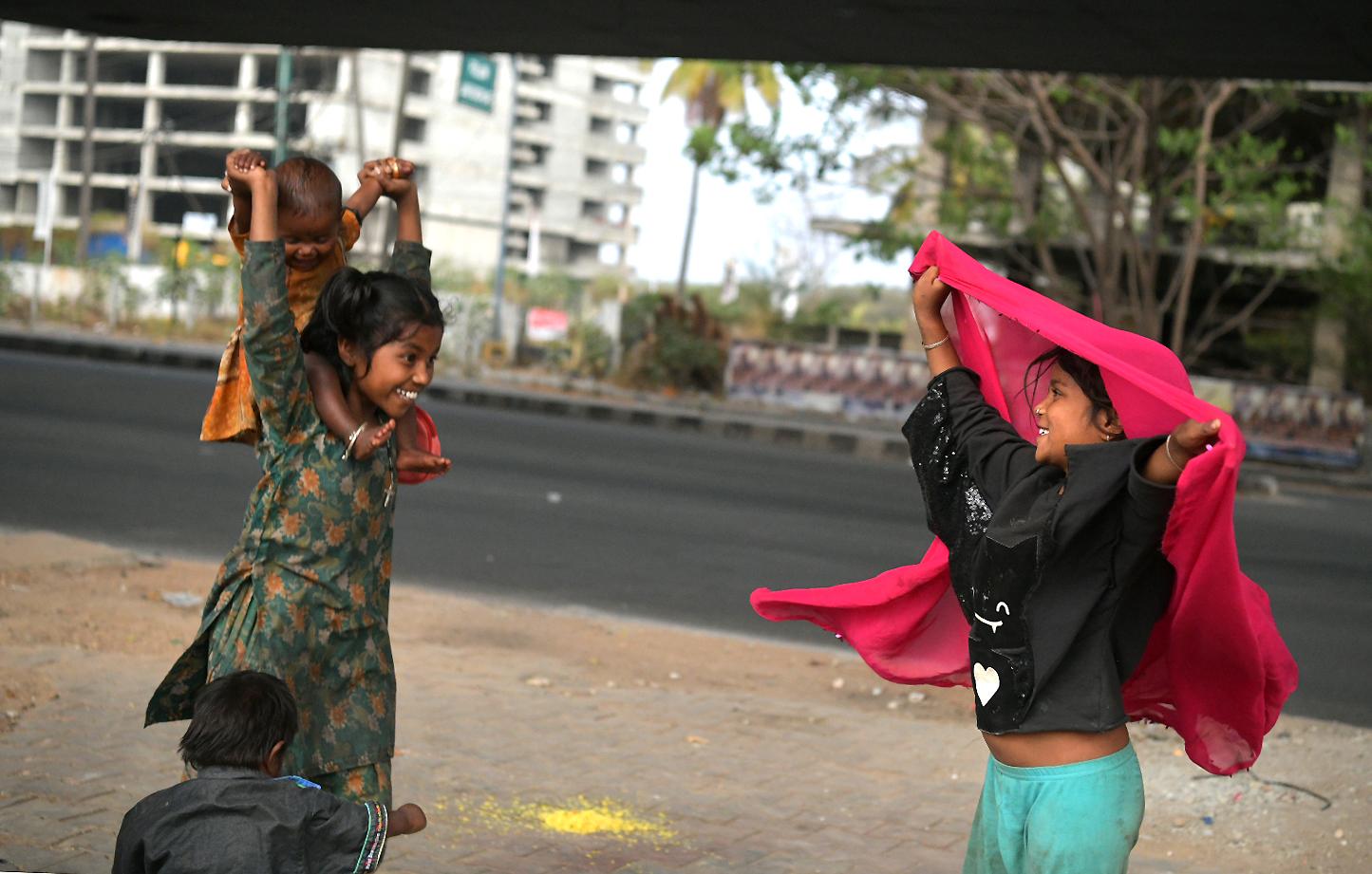 Children are oblivious to the problems around them and enjoy their evening. 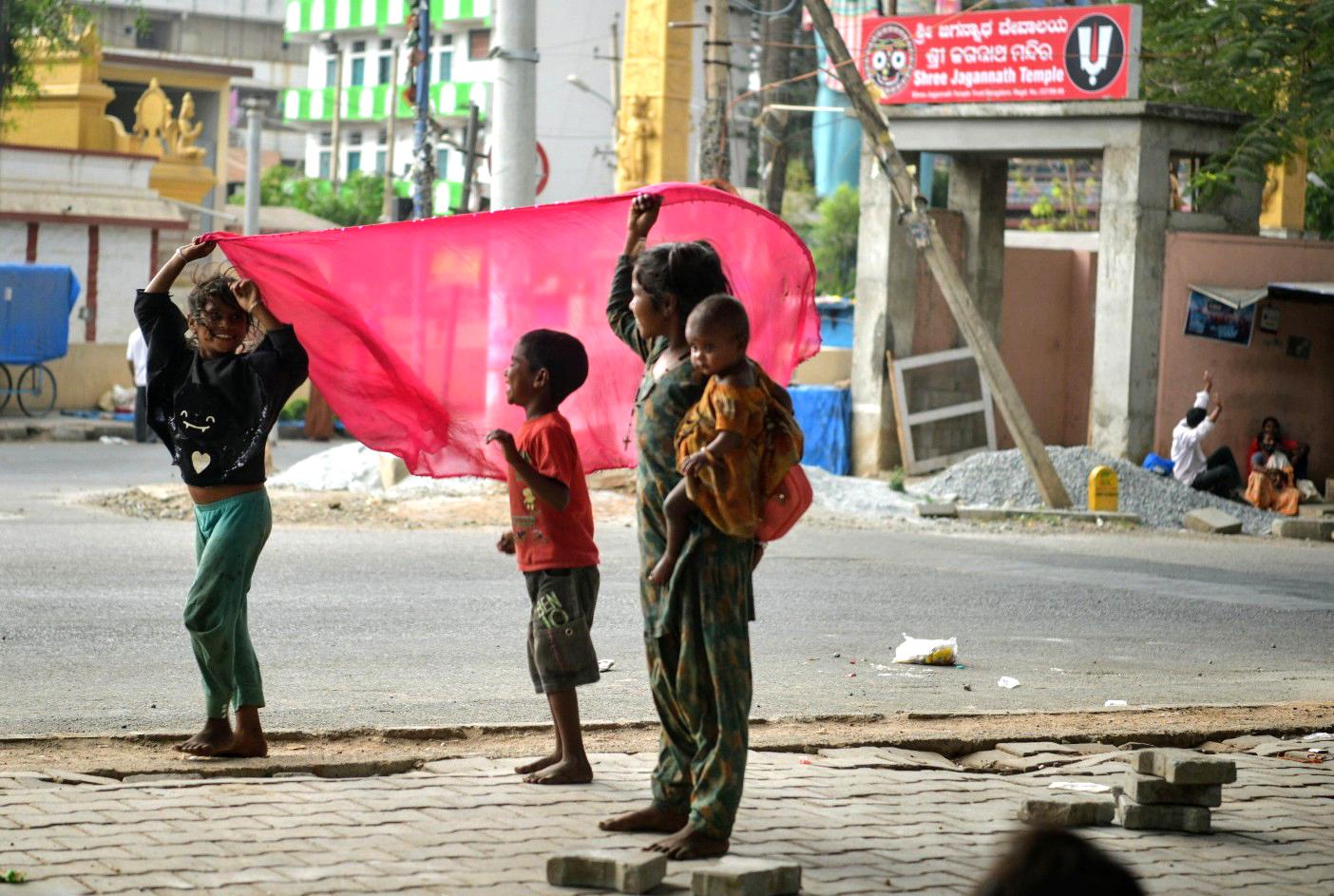 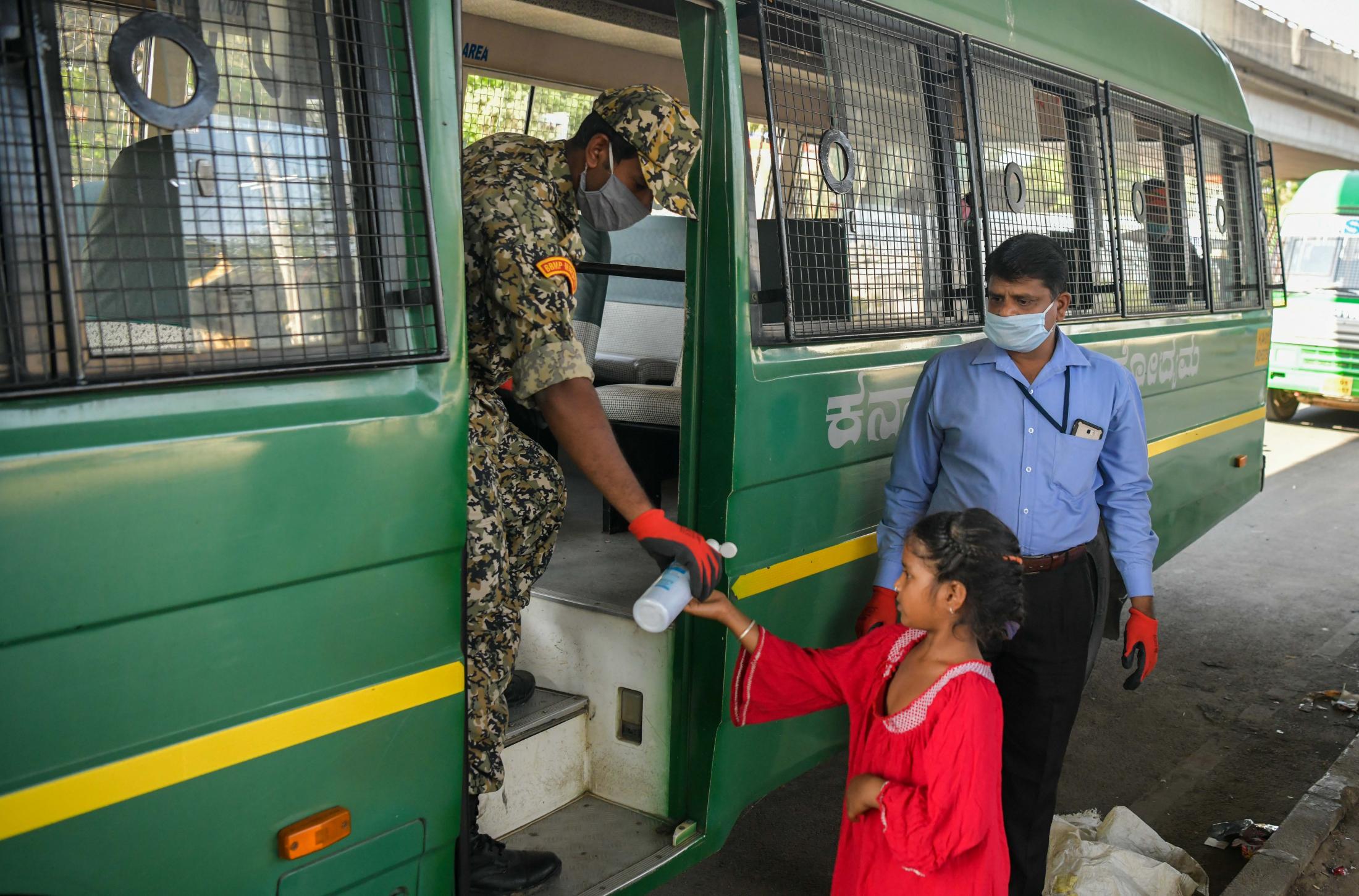 The girl with the pink dupatta was wearing a pink top and instantly recognised me, she sanitises their hands before boarding the bus. 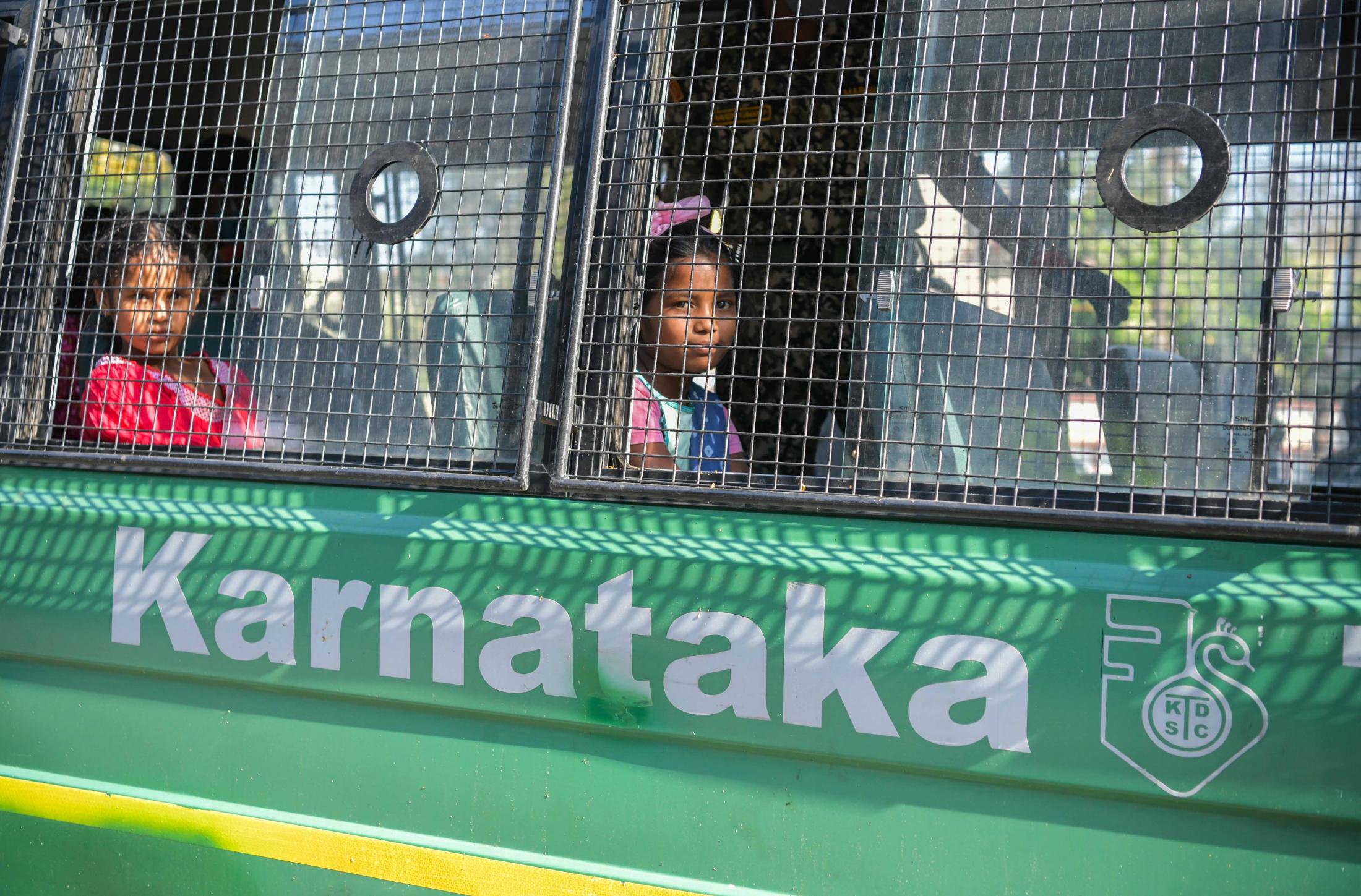 and off she goes