Life on the Rocks: One boulder at a time
A pair of good sturdy shoes, a crash pad, a chalk bag and a passion for climbing – are the only essentials you need to be a boulder.

Bouldering is another form of rock climbing. It involves huge boulders and it’s a smaller climb that does not involve ropes. However, it requires a lot of precision as it’s quite technical and needs good footwork and smooth body movements. In India, the only exposure one had to this sport was to watch it on a show or read about it in a book. The residents of Hampi saw foreigners flocking and spending months climbing these boulders. This got them interested in the sport and they learnt by watching them. Some of them are not only excelling in it but are making a livelihood by teaching the sport today. 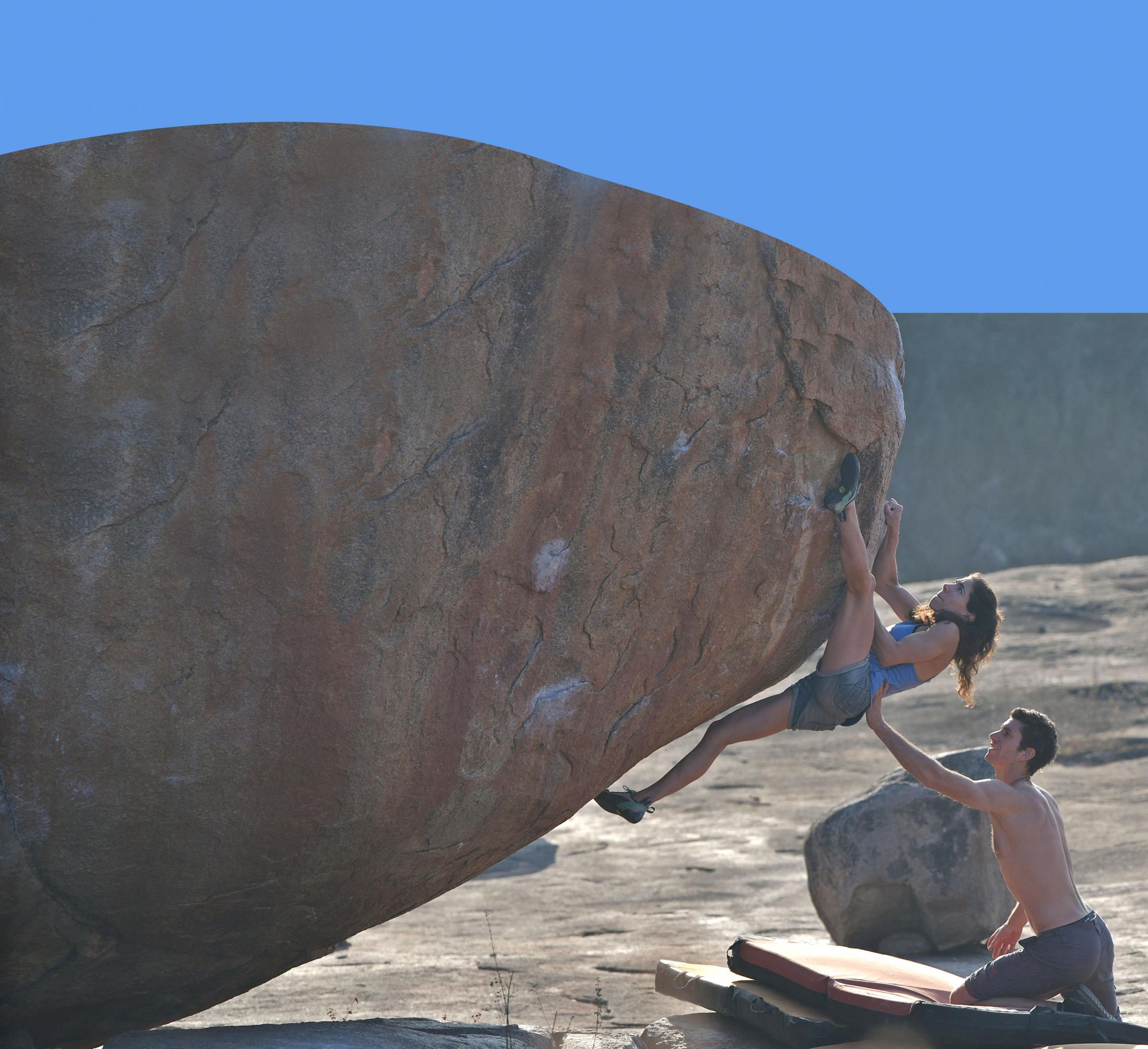 You see boulders everywhere. And suddenly you spot someone trying to climb one slowly but surely—looking for handholds. You see spotters who stand below the climber to ensure the climber doesn’t have a hard fall. But if there is a misstep and the climber slips down, there is a crash pad to cushion the fall. The climber rises and starts climbing again—this time reaches the top. And naturally feels on top of the world. This is a familiar scene at the heritage town of Hampi, which has boulders everywhere. Not many know that Hampi has another side to it --- popularly known as the Hampi Island. This is also the world’s largest bouldering area making it the Mecca for climbers all over the world. 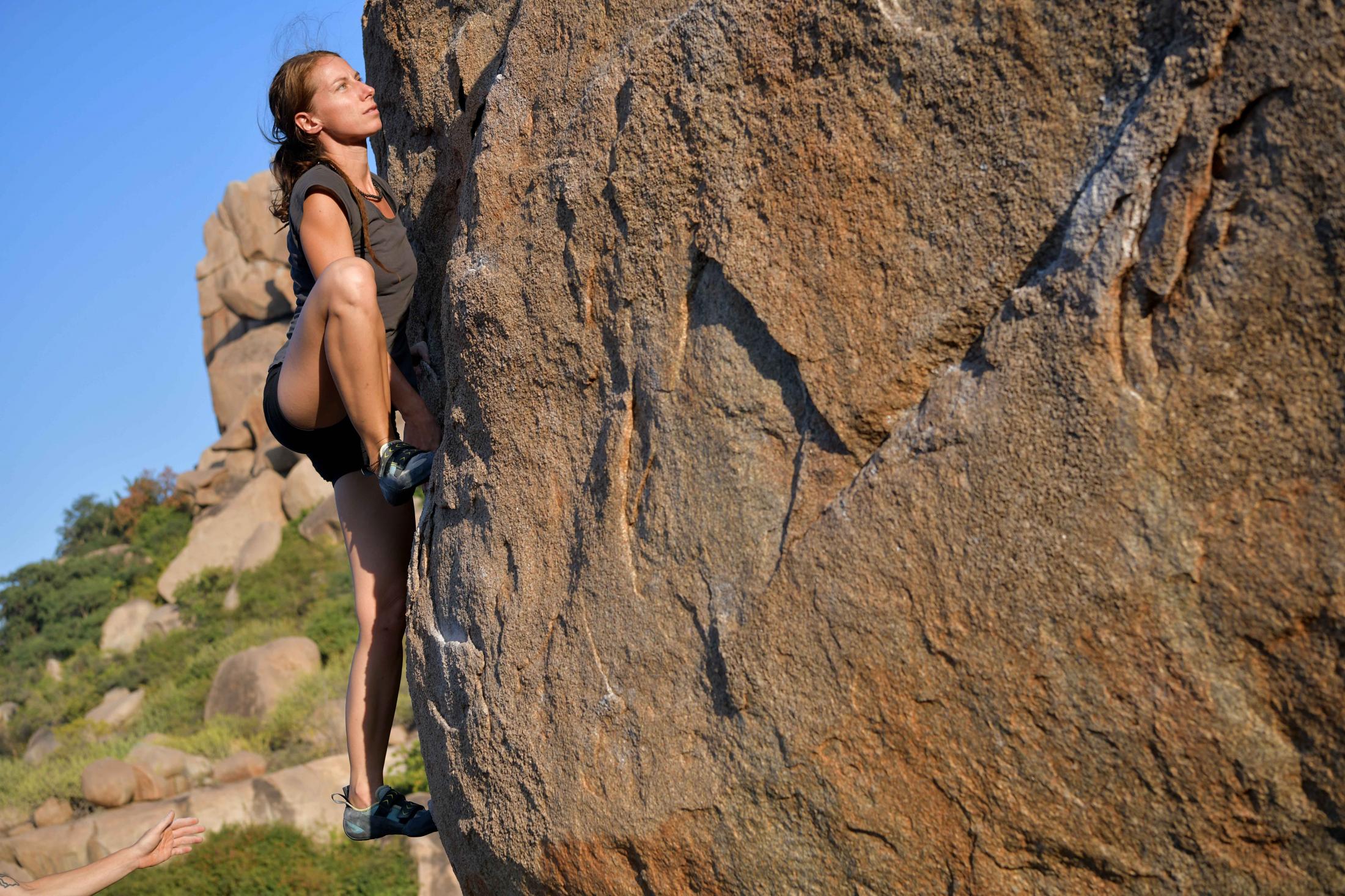 Although less a sport and more a passion in India, bouldering has come to be a career choice for very few, thanks to the lack of funds and support. Until the advent of social media, the only exposure Indians had to this sport was by watching it on a show or reading about it in a book. However, don’t let fun videos fool you into taking up this sport without proper guidance. Technique plays an important role here, as contrary to the belief that your upper body needs to be strong, the real work happens mainly through the feet. Understanding the movements of your own body is a vital part of your training. Several climbers feel that bouldering is not just a sport, It’s a group activity. As a fun activity, rocks were also given names like Sandwich, Sleeping Buddha, Little cobra, Indian summer and Indian winter. While some names were simply given because of the shape of the boulders, the reasoning for some still remains a mystery.

There’s a map that helps climbers spot these rocks.The sport has, over the years, also found a new function – of community service. Climbers swear that the social aspect motivates them to climb harder, helps them to focus better and makes them stronger individuals as it helps them in coping with failure. At times, a boulderer can fail on just one single move for a whole year. Keeping this in mind, two young individuals -- Thimma Parashuram and Yadav R -- conducted a bouldering festival in January. 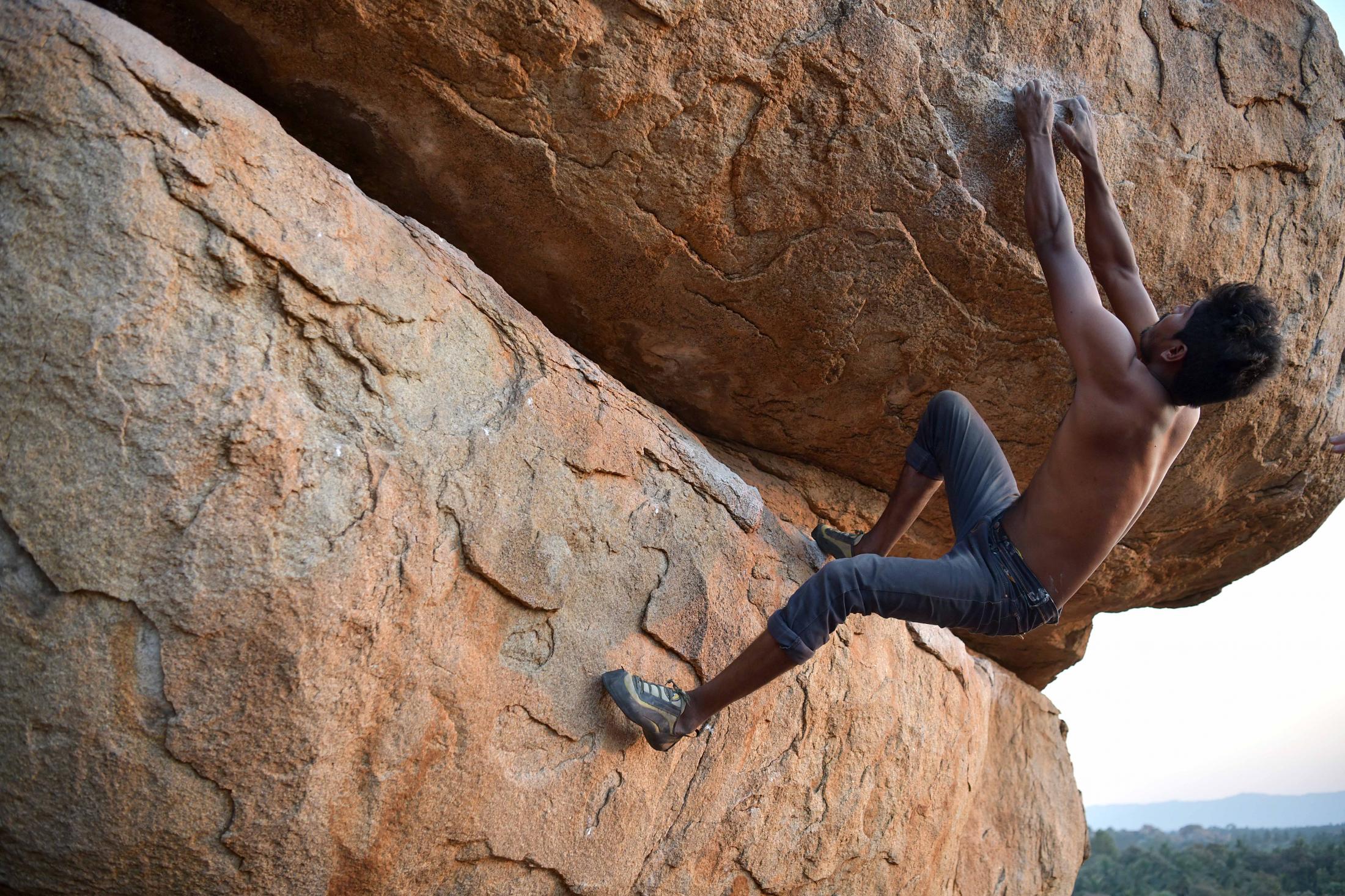 Parashuram is a Hampi- based athlete who found the rocks addictive since his first expedition in 2006 and has never looked back. Yadav, on the other hand, is a mountaineer from Bengaluru. “While there are other festivals which have climbers with a lot of experience who’ll climb irrespective of a festival, our vision is to introduce more Indians to climbing. We include other activities to make it more fun such as slacklining during breaks or healing time from injuries. We hope to continue the tradition and do many more in the years to come,” he says. The festival gathers people from across the world. If you see them together, it’ll almost give you the vibe of a family. From newcomers to experienced climbers, you’ll find them all. And importantly, you will find tales of inspiration.

Dhillan Chandramowli (34) from Bengaluru is a radio consultant and writer who now is a consultant with a bouldering gym in Delhi. He says he is trying to balance time between travelling and climbing. Dhillan adds,  “Unlike the West, Indians cannot afford to take off for months just to go climbing. One needs to have a ‘proper job’. Another challenge is the lack of infrastructure and training facilities, which makes our learning curve slow and dull.” Hence, most of them are recreational climbers. But not Sharmila Thakur. Over 20 years ago, she moved from Goa to Hampi, set up 20 natural huts made from cow dung and mud and created the ‘Goan Corner’.

The 2004 movie, ‘Pilgramage’ by Chris Sharma, is based on this setting. Ever since, her corner has been a hot spot for climbers, making it an unofficial club. One such trained climber is Nick Russell from England. His passion for climbing has known no bounds. He started at the age of four, mostly in northern England and Switzerland. His first visit to India was at the age of 40 and ever since he has been a regular visitor every winter. “Hampi has some very good quality rock, but that’s not all. What makes it special and why people return so often is for its spectacular landscape, amazing history and culture,” he says.

In the early 1990’s some of Europe’s best climbers such as Jassi Poyhonen, Jerry Moffat, Kurt and Johnny Dawes were the pioneers of exploring the rocks of Hampi. With a nostalgic look on his face, Russell says, “I have been a climber all my life. If I walk this plateau, I would know every single climber, the community is more important than the rock.” 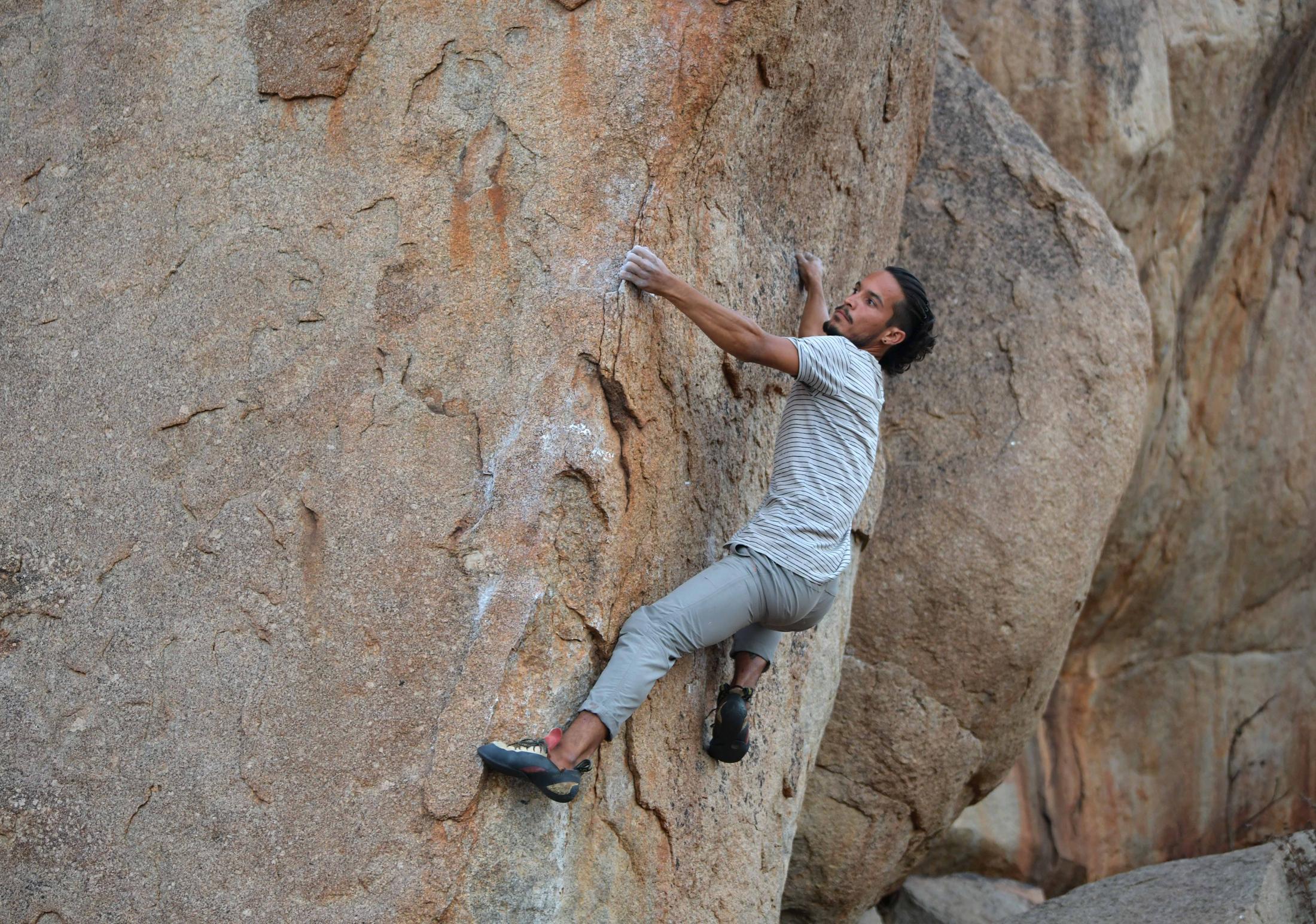 Sunny James - Hampi Boy said - "While I couldn’t pursue a career in architecture, I have made my peace with climbing and train people today." 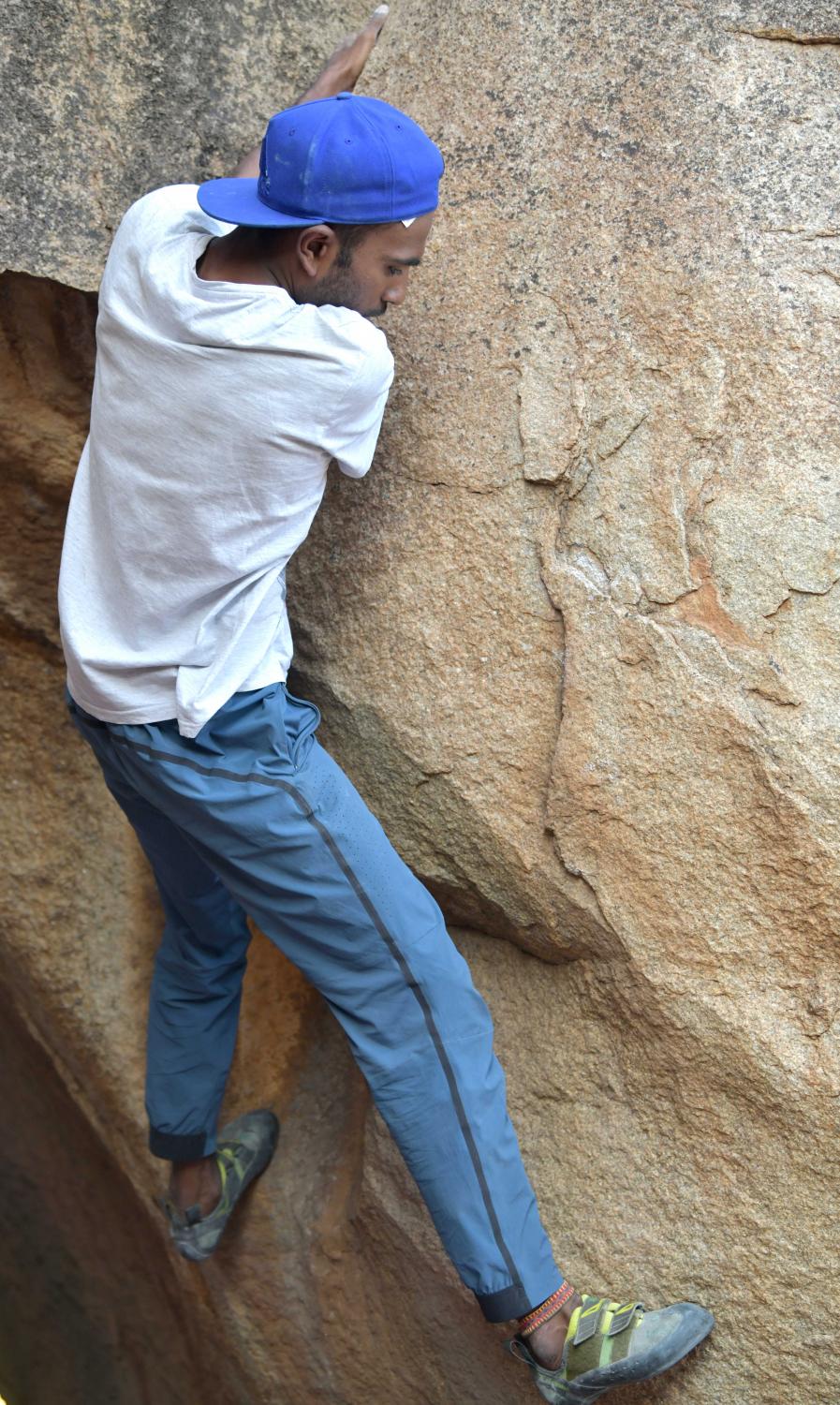 Bharath Gowda a Bangalore Boy is One of the very few full-time climbers and instructor. He said - "you need to love it and be motivated to break new ground as the economical side of it is very tough and makes even him question his decision at times." 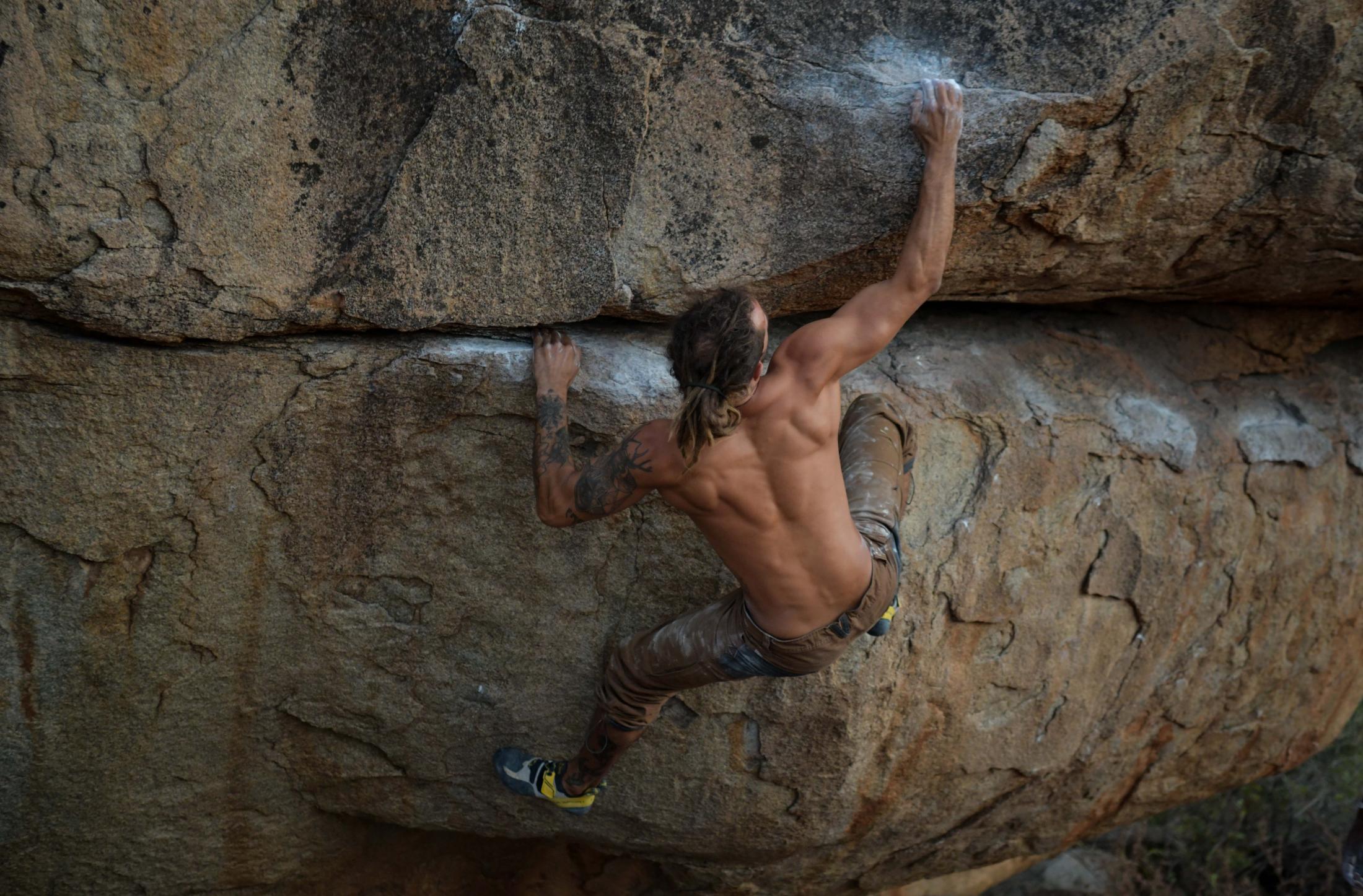 Ollie McPherson is a carpenter back home in the U.K.was friend introduced to bouldering in a gym back home but Hampi was his first time outdoors two years ago which has become an integral part of his life and makes Hampi a lot more special. The sport helps him channelise his energy and ensures his fitness. 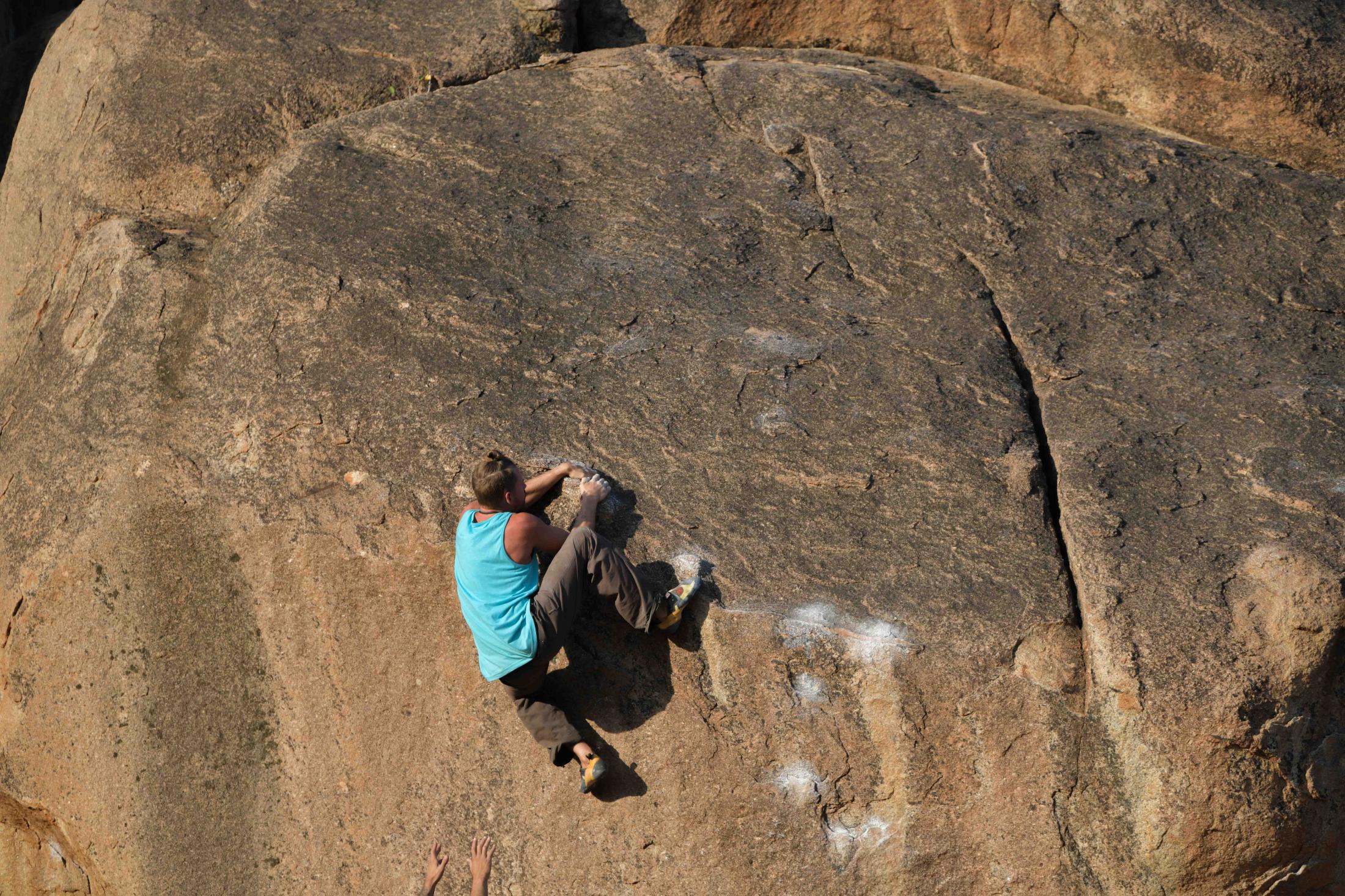 Mathias Kluger from South of Austria was introduced to bouldering during a winter when rock climbing outdoors was difficult. He said "it’s fun and more." This is his second visit to Hampi. 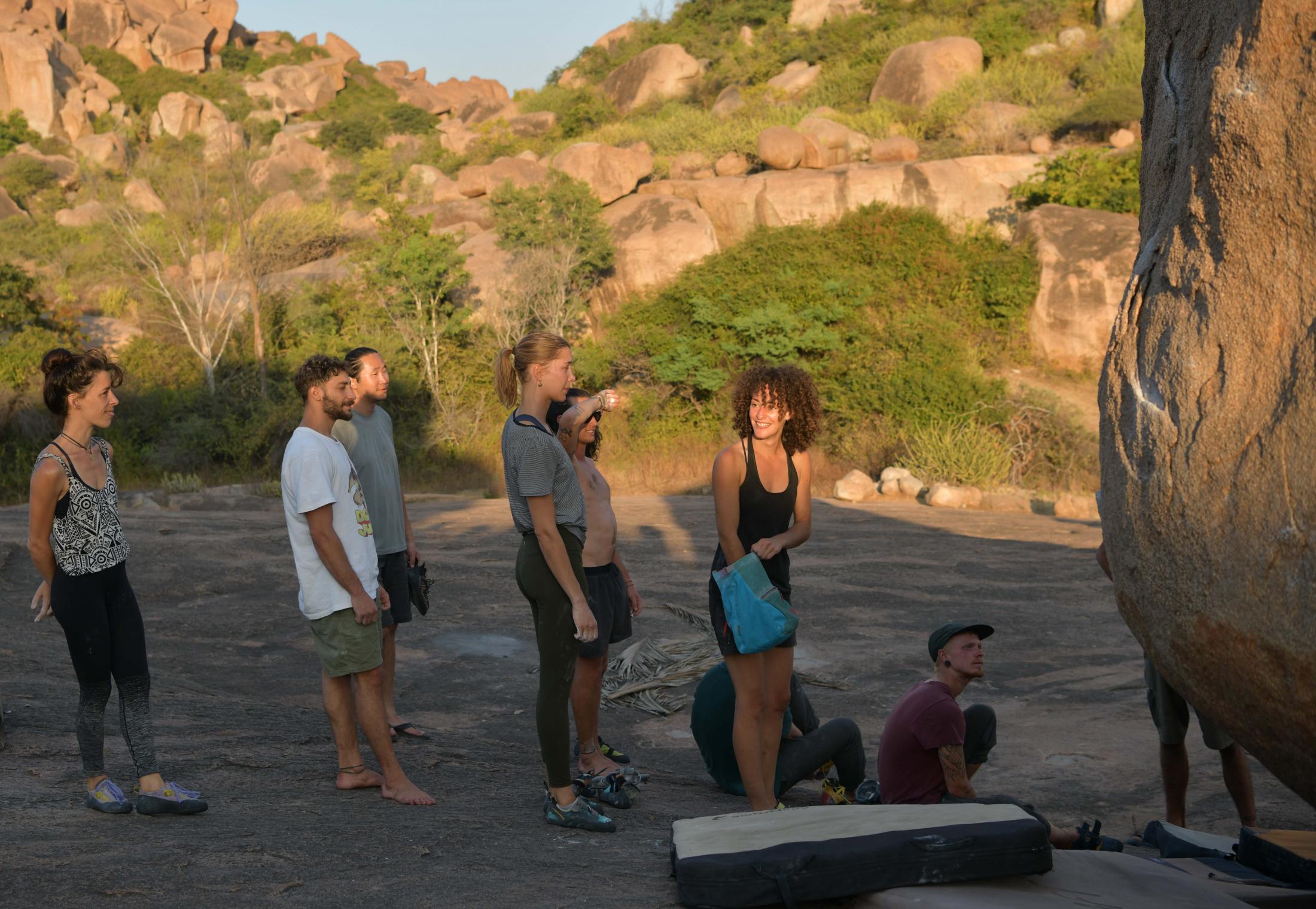 The sport is big on community and a lot of climbers say that this helps them push their limits and aim higher. 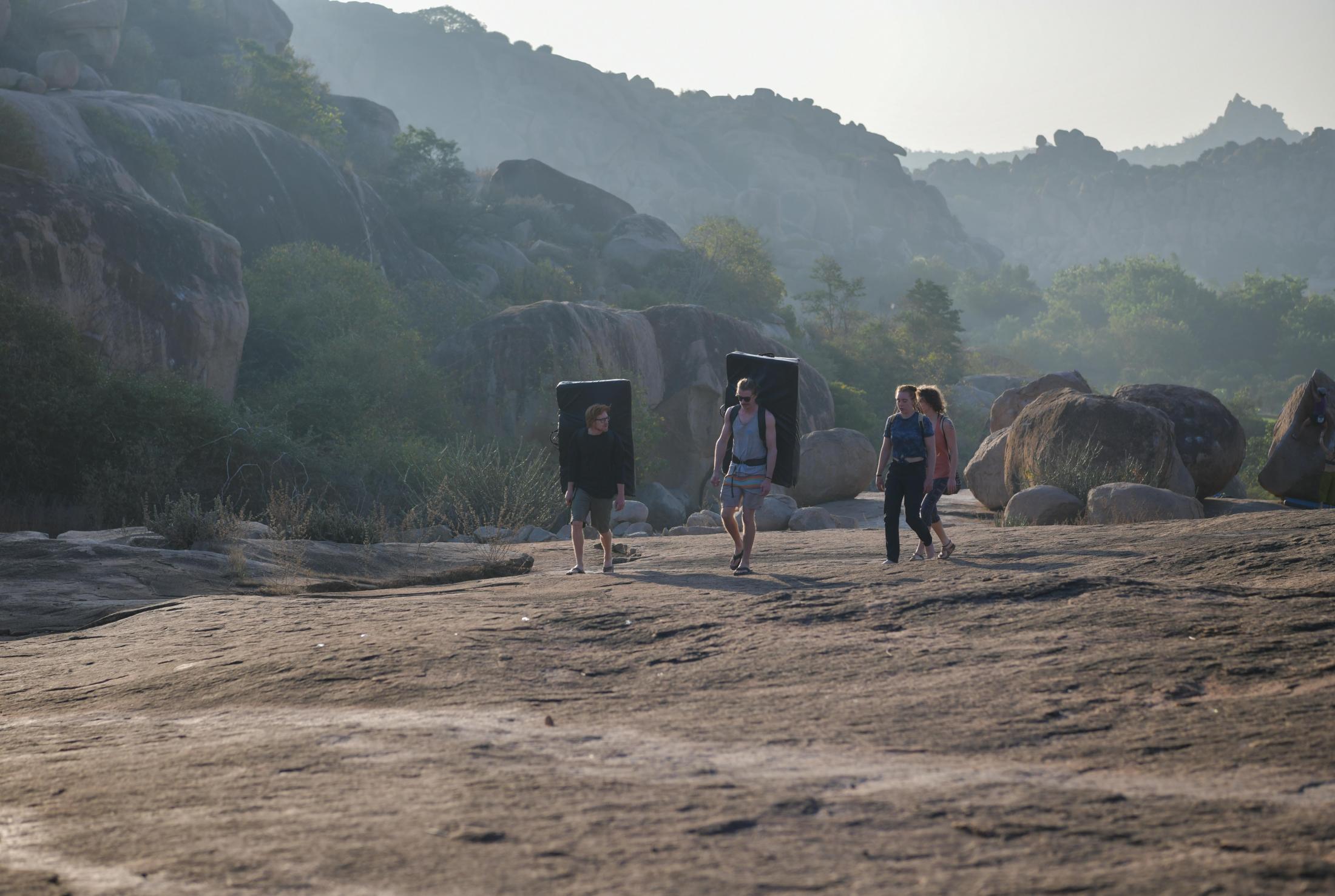 A very common sight on the rocks. A group finishes topping a rock and moves to another with their crash pads. 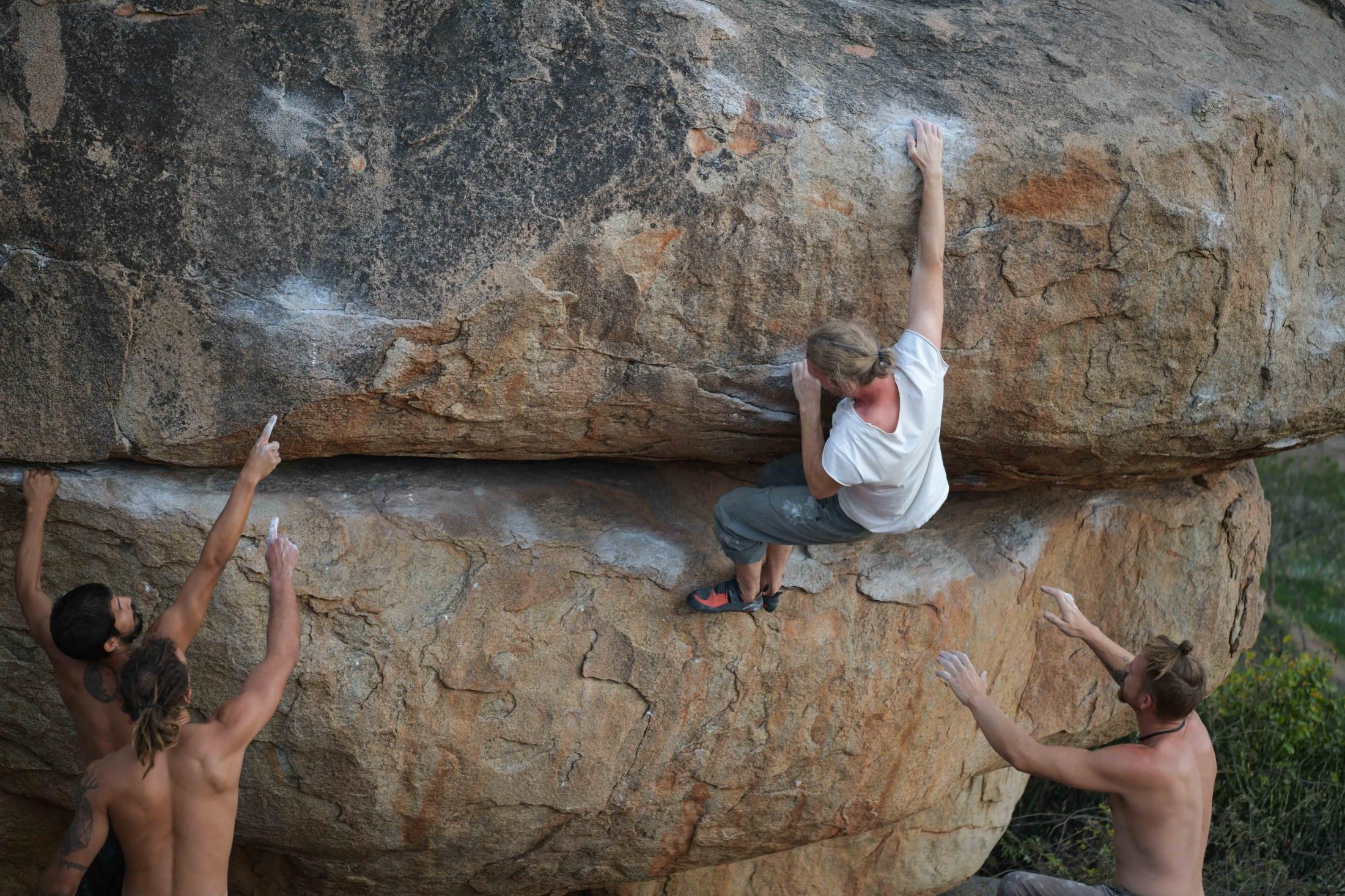 The community constantly supports and pushes every climber. 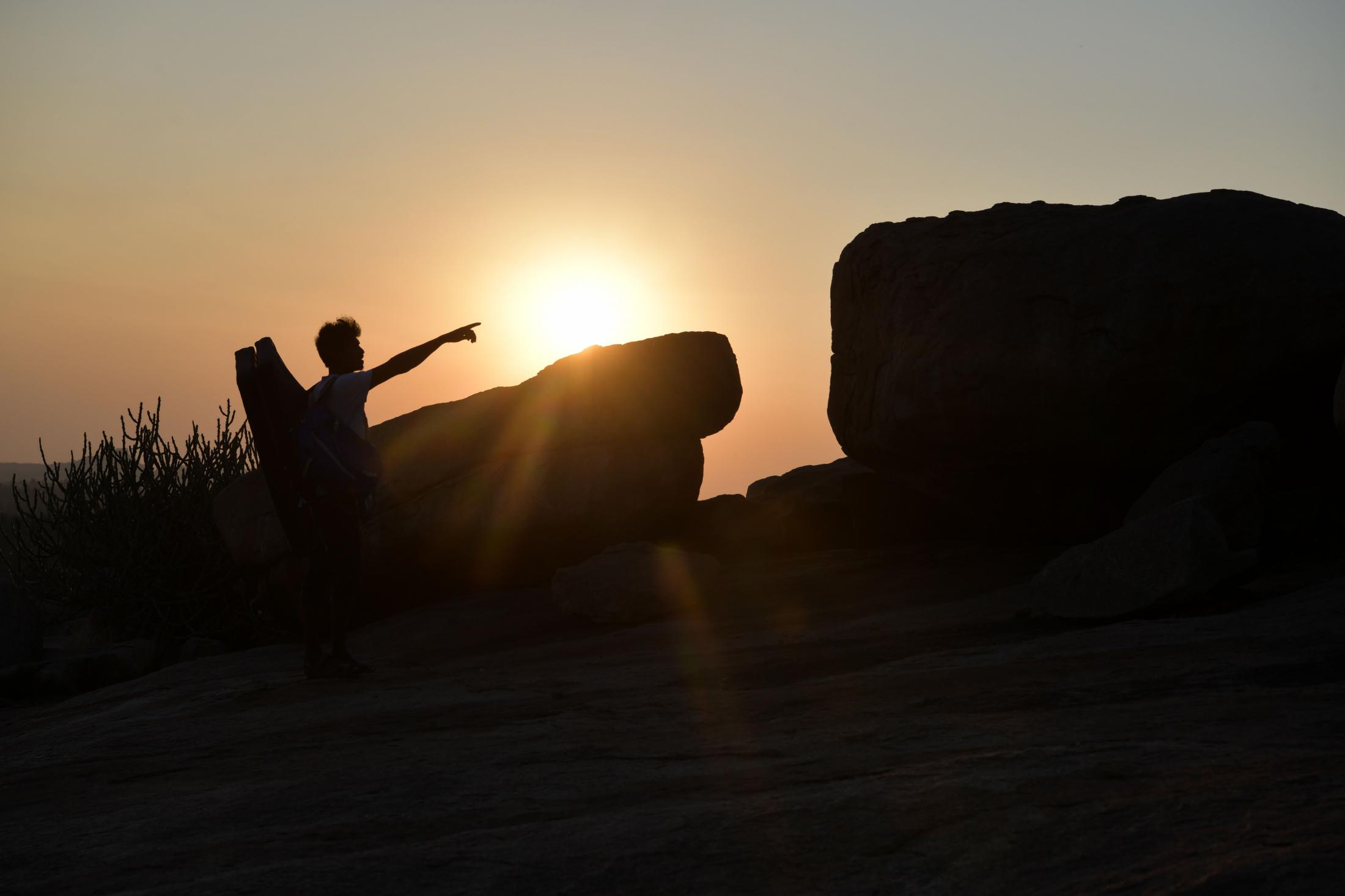 While the sun sets the energy levels on the rock is still high and Thimma is spotting a rock for the next climb. 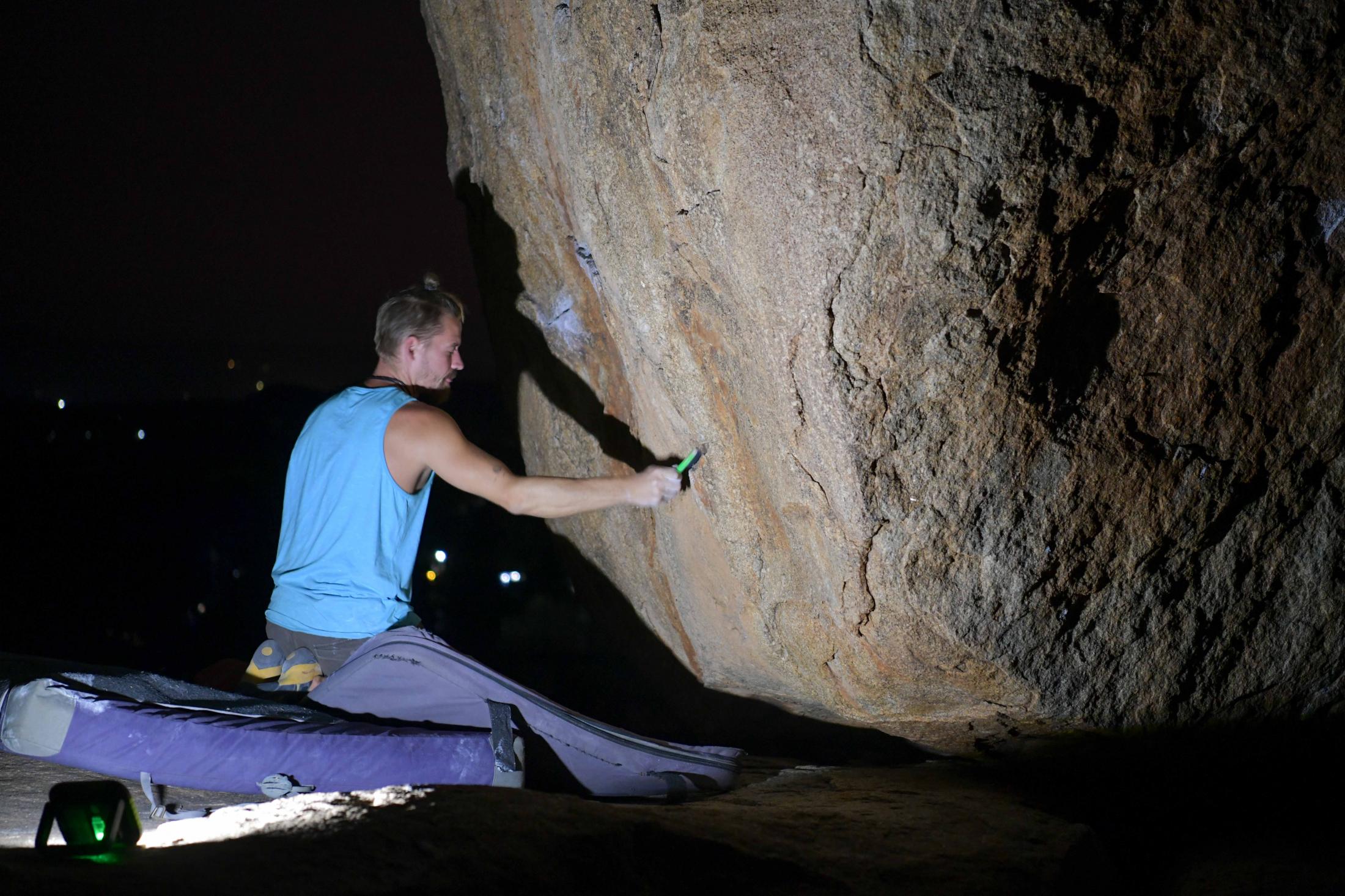 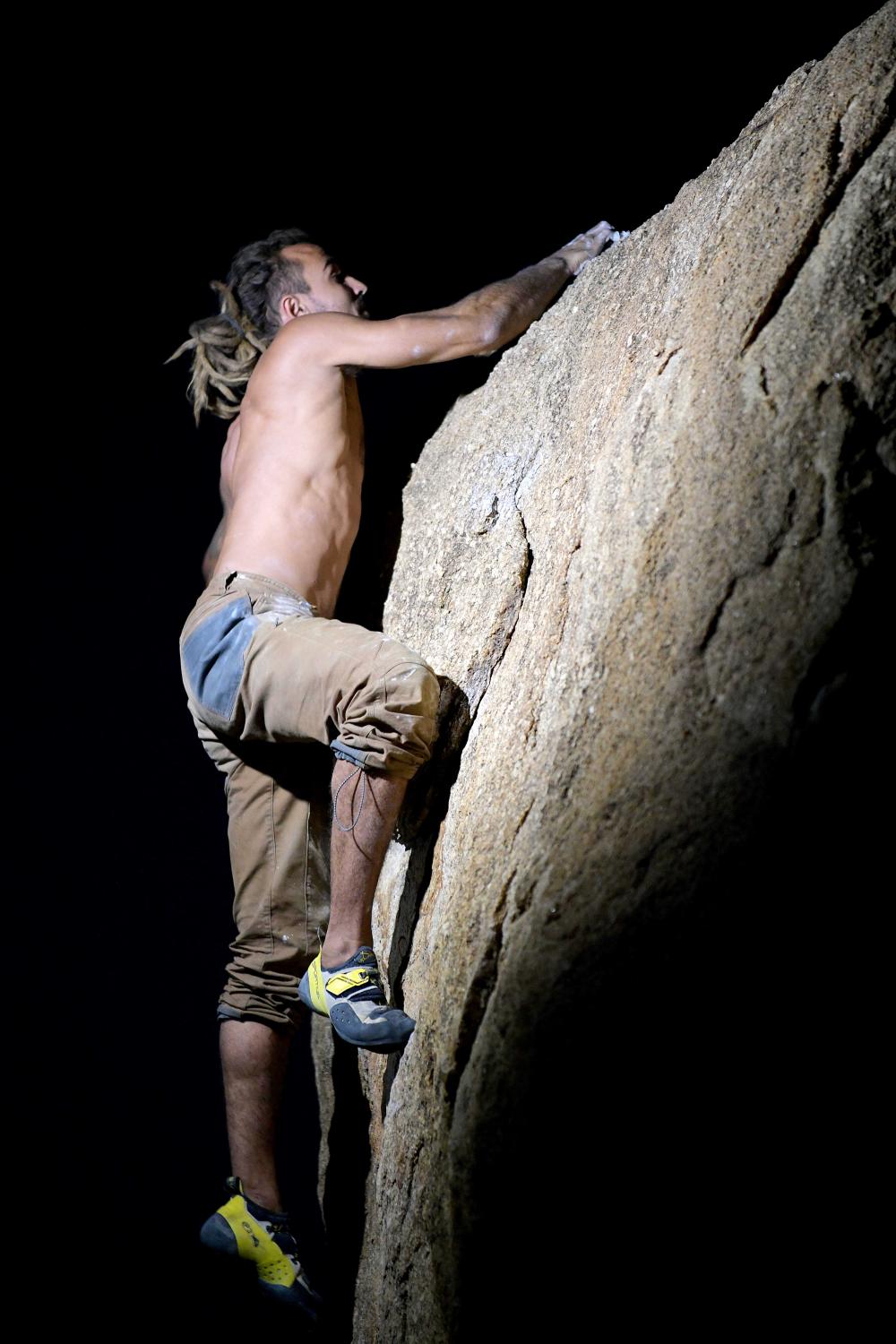 Climbers can do this all night long 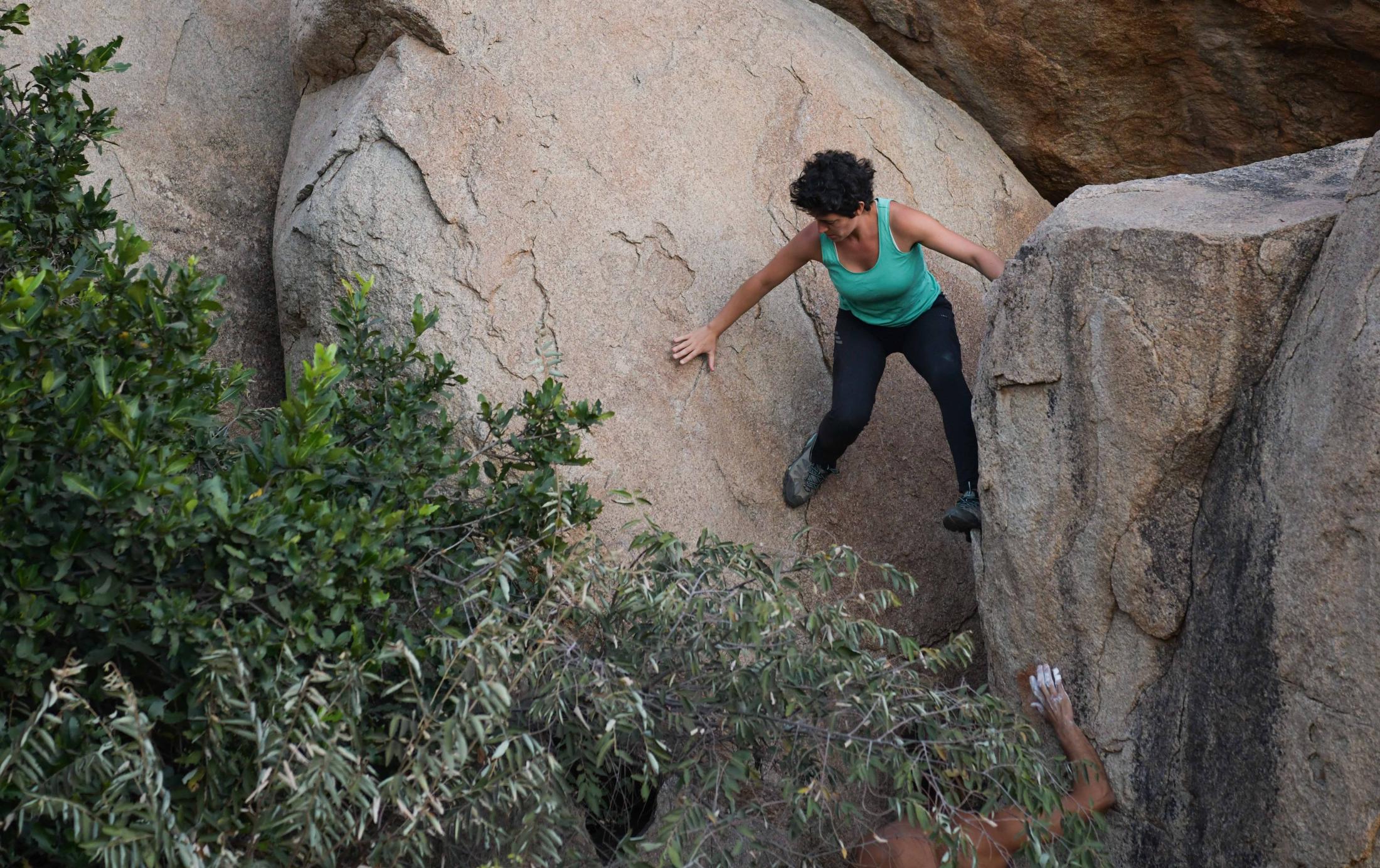 The descend is as technically challenging as the ascend. 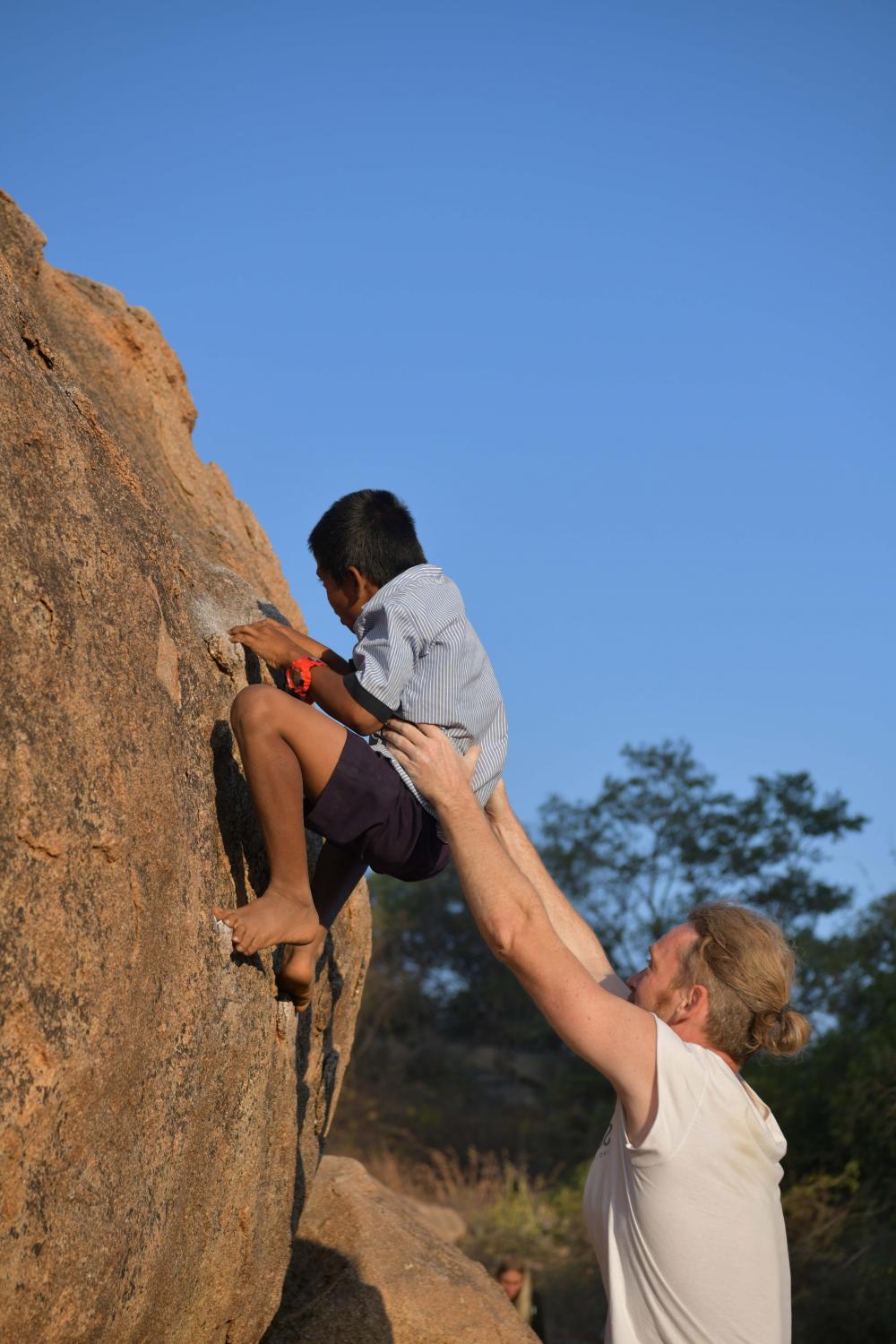 While many like Nick, Yadav and Parashuram would like to expand bouldering in India, the current scenario is far different from their dreams. Russell says, “Only the elite can afford as there’s a 40% import tax for just a parachute. I wish more could be done, especially for children in and around Hampi. It would be nice to encourage an ordinary Indian who cannot afford a pair of climbing shoes.”