Home is where the shore is

After practising for six hours straight, these boys can barely open their eyes the following morning. Exhausted but determined to do well in the upcoming competition Surf Turf Classic 2021, they pick their surfboards and walk to the point break to chase the tide.

A little beach town on the east coast of India, which is known only for its temples, sculptures and a weekend get-away for Chennaites has a lot more than what meets the eye. Look towards the far end of the beach in the direction of the shore temple, you will see heads bobbing in the water and colourful surf boards.
While surfing is still alien to India, it’s been one of the popular haunts for surfers locally and internationally for decades. Dave and Rob two Australians lived here and set up shop for surfers. They have been instrumental in helping the first-generation of surfers learn the sport, understand how to build boards and even helped them with launching their businesses. Today, there are ten surf schools of which seven are owned by fishing communities.
Surfing has been a boon to the fishing community said Murthy Megavan from Kovalam fishing Village. He said – “Surf culture has given a sense of ownership to these fishing kids who teach tourists for a living. It also helps them build their personality as they need a lot of soft skills. A lot of them are learning English.”
These children from the fishing community who cannot even afford a pair of shoes are all self-taught surfers.
How and why did this sport become a big part of this fishing community?
A lot of them come from families with alcohol abuse and surfing helps them focus on themselves and gives them a purpose to live for. Every new generation starts earlier than the previous generation. Some have started surfing when they were three years old 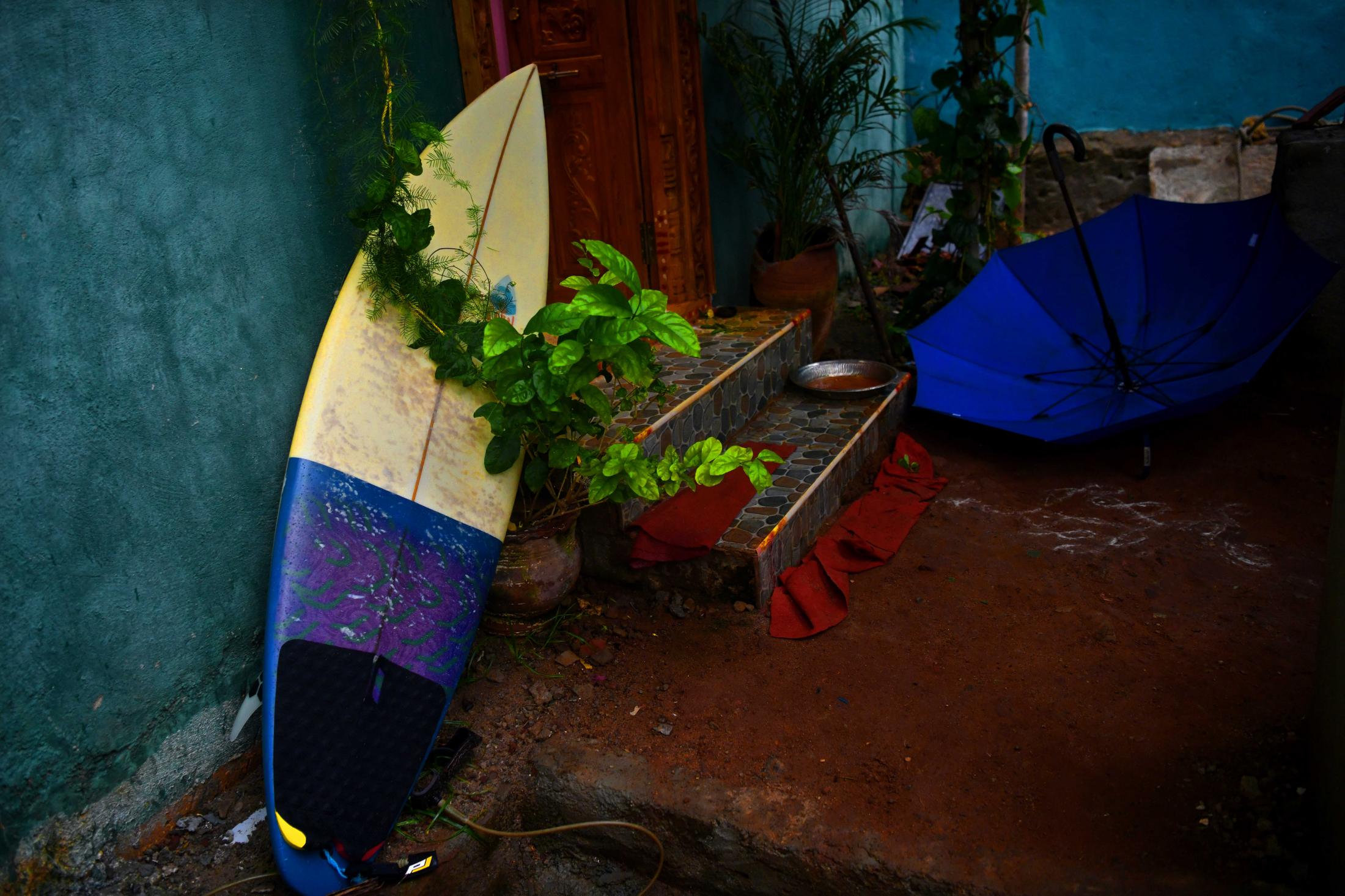 A very common sight in fisherman’s colony. Surf boards are found outside homes of surfers.
The first-generation surfers along the coast of Tamil Nadu are Mukesh Panjanathan known as Mumu, Velu, Santosh, Murthy and Shankar who learnt surfing by watching foreigners and passed on the knowledge to the younger generations. While they wanted to surf, they had no access to equipment. Mumu said – “All the children who surf here are from fishing communities and the sea is their playground”. All of them accompany their parents in the morning to fish in wooden boats and when the boat is pulled apart to dry, Mumu along with his friends took a plank and skid into the sea on their belly’s. These planks are similar to boogie (body) boards. Mumu (36) dropped out of school and did odd jobs such as working in restaurants, cleaning homes, toilets and more. He hated his life and decided to pursue surfing seriously but no one gave him a board. He said – “I approached foreigners who came here to surf and most of them said no. It’s only after I got my first board did, I realise why. They are not only expensive but delicate. If anything happened to a board fixing it would be an impossible task as you did not get raw materials in India then.” Two foreigners left their boards behind and one of his friends who took them used to give them on hire. However, it wasn’t easy to afford one and he used to buy him a drink in return. A Japanese surfer wanted to sell his board before leaving and when Mumu asked him for it, he said – “I am not giving it away, I am selling it.” He managed to gather Rs.1,500 by borrowing from friends and family and told the Japanese surfer that this is all he has. The surfer then laughed and said – “A leash costs that much but I will give this board to you for this price. I wanted you to earn the board and understand the value of it.” 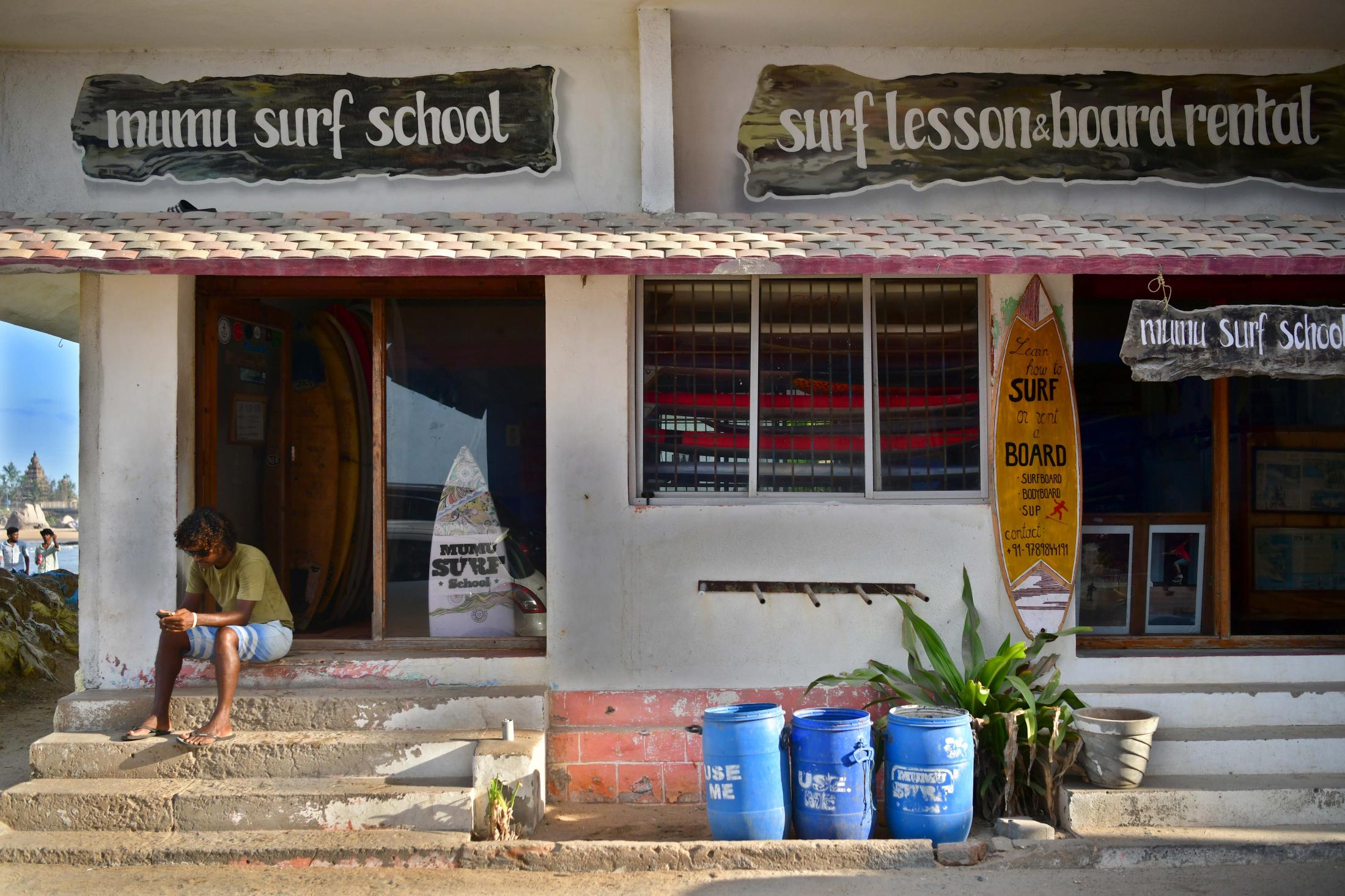 This board has been passed on for generations and now stands as a sign board outside Mumu surf school which started out in a garage and finally made its way to a small property on the beach. He lets the children borrow boards from his shop in return for cleaning the beach. That’s how the surfing culture began here. However, this struggle continues as everyone does odd jobs to be able to afford a second-hand board, and maintaining them is harder. All these surfers start their day at 3:00 am with fishing, followed by surfing if the tide is good, and if not, they finish school and other chores before hitting the water.

Áine Edwards, an Irish lady who has been living here since 2011, works closely with the kids by taking videos of their practice sessions, which they review every day. Ragul Paneerselvam a second generation surfer said, “While there is a lot of potential for these kids to do well, they need a coach to help them make it big. Until then, they can only enter local competitions.”  A pro has a minimum of five boards in a competition, these boys have one second hand board which has been through a lot 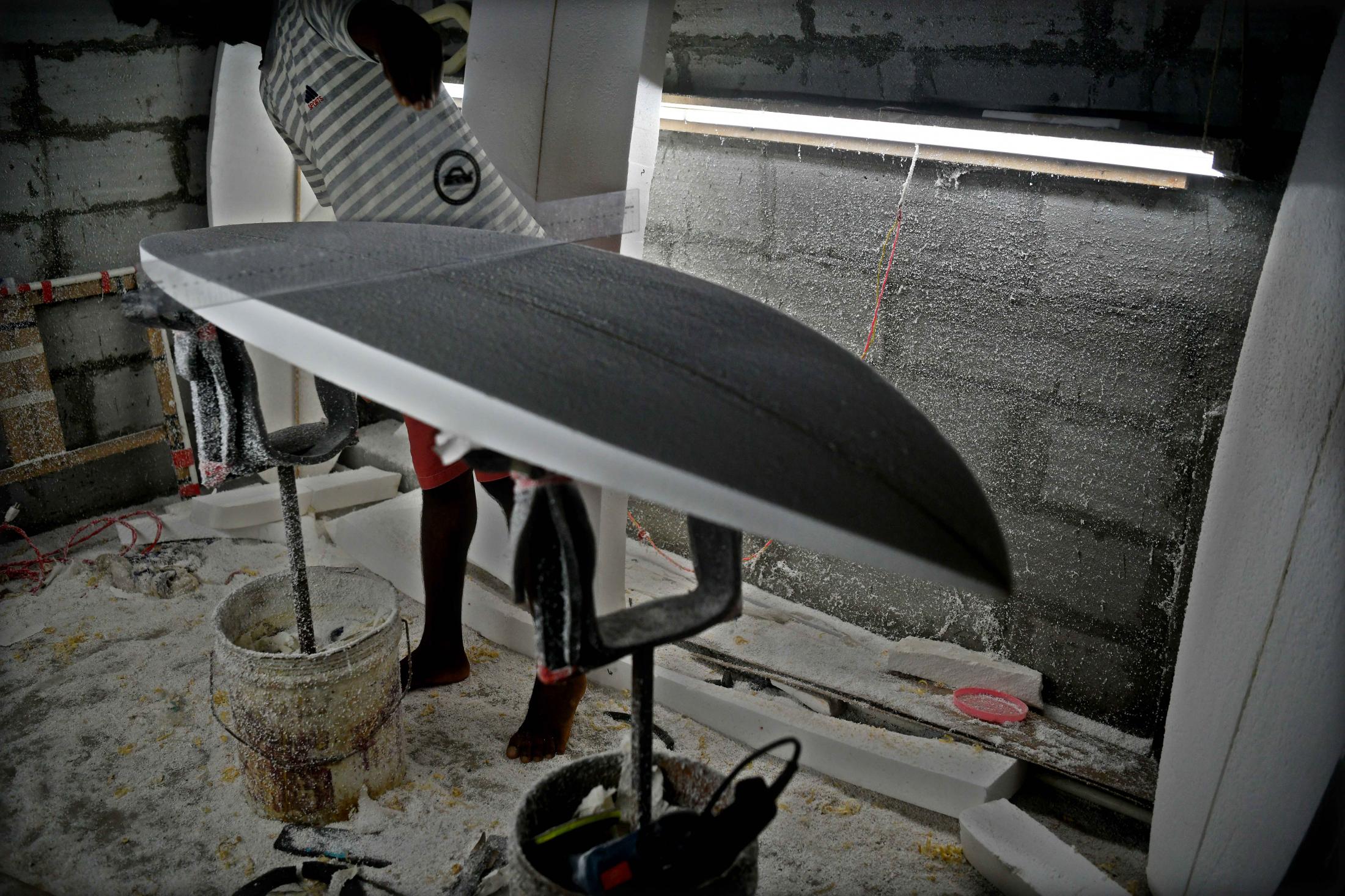 Ragul is one of the very few surfers who continues to make surf boards. He learnt the craft from Dave. He said – “When I started surfing there were only four of us at the point and now there are some 30 kids.” 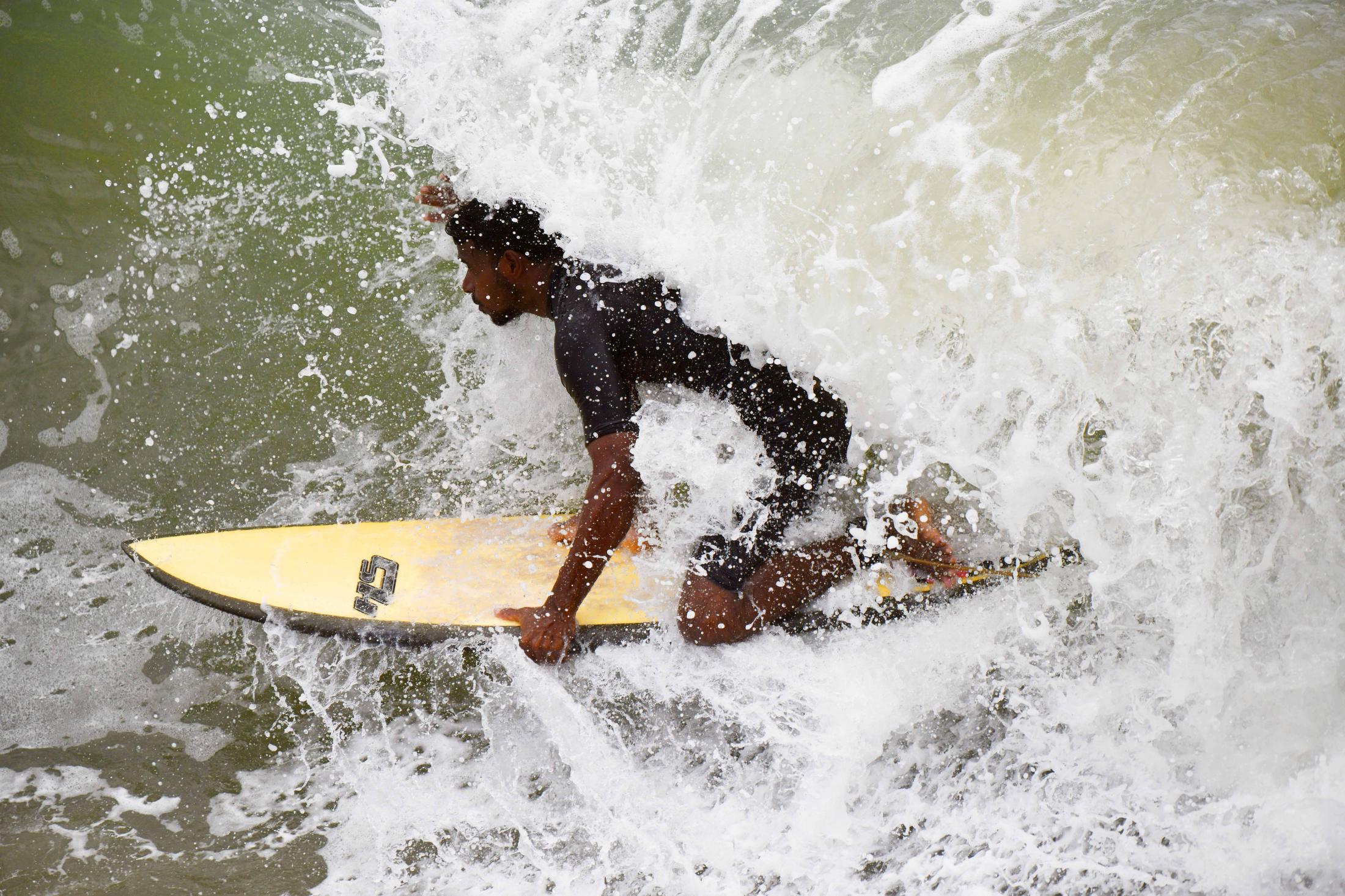 Rahul paddles his way onto the board catching a wave He jokes saying – “It was easy to catch waves then and now it’s a pain with so many kids. But on a serious note, it’s heart-warming to see so many local kids taking this sport seriously. None of whom have undergone any training and the seniors help these kids by observing their form and correcting as and when needed. Photos and videos taken by people helps this process.” 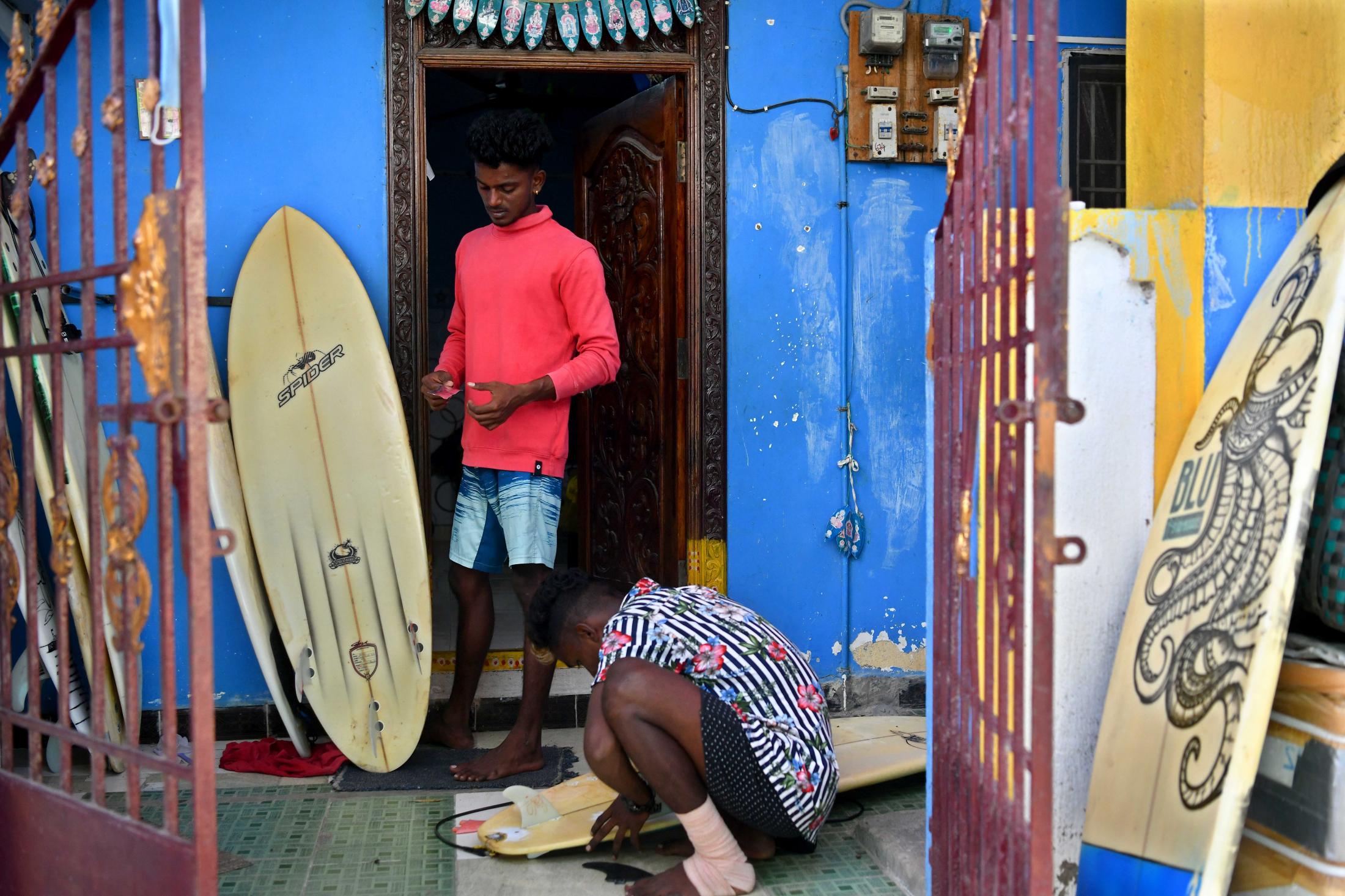 Nitish and Sanjay bought second-hand boards from their fishing money. These boards get damaged when they try tricks such as aerials and more. They are using a tape to hold the board together as they do not have three days to get the board fixed. They are preparing for a competition which takes 4-6 hours of practise each day. They say that with good coaching they can train the younger ones who will hopefully be able to participate in the olympics one day. 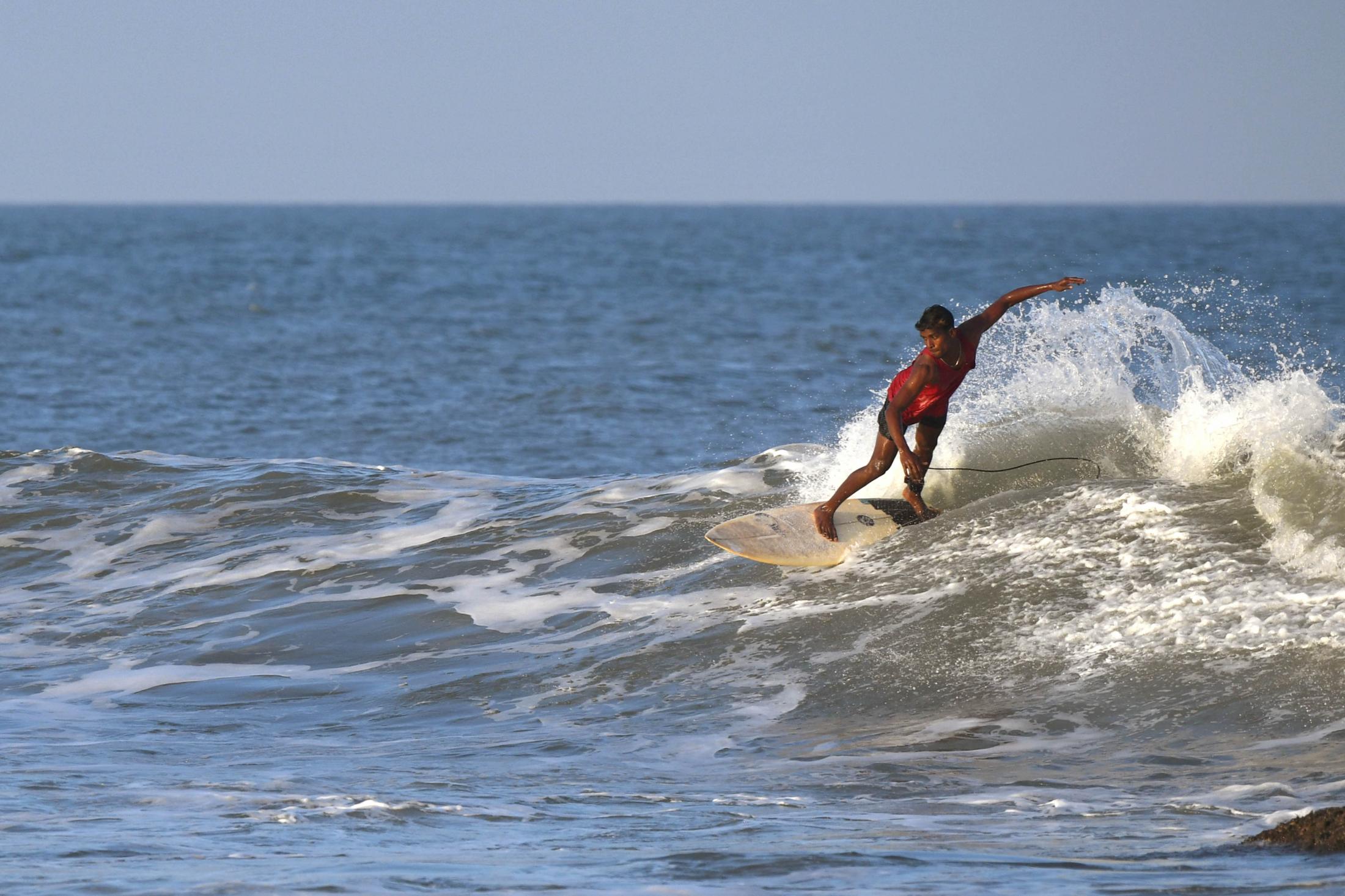 Sanjay practising for the upcoming competition Nitish (18) & Sanjay (21) – They started surfing as teenagers and motivate each other to do better. The boys hope to be able to buy better boards and make a trip to Bali which is their dream surf destination. 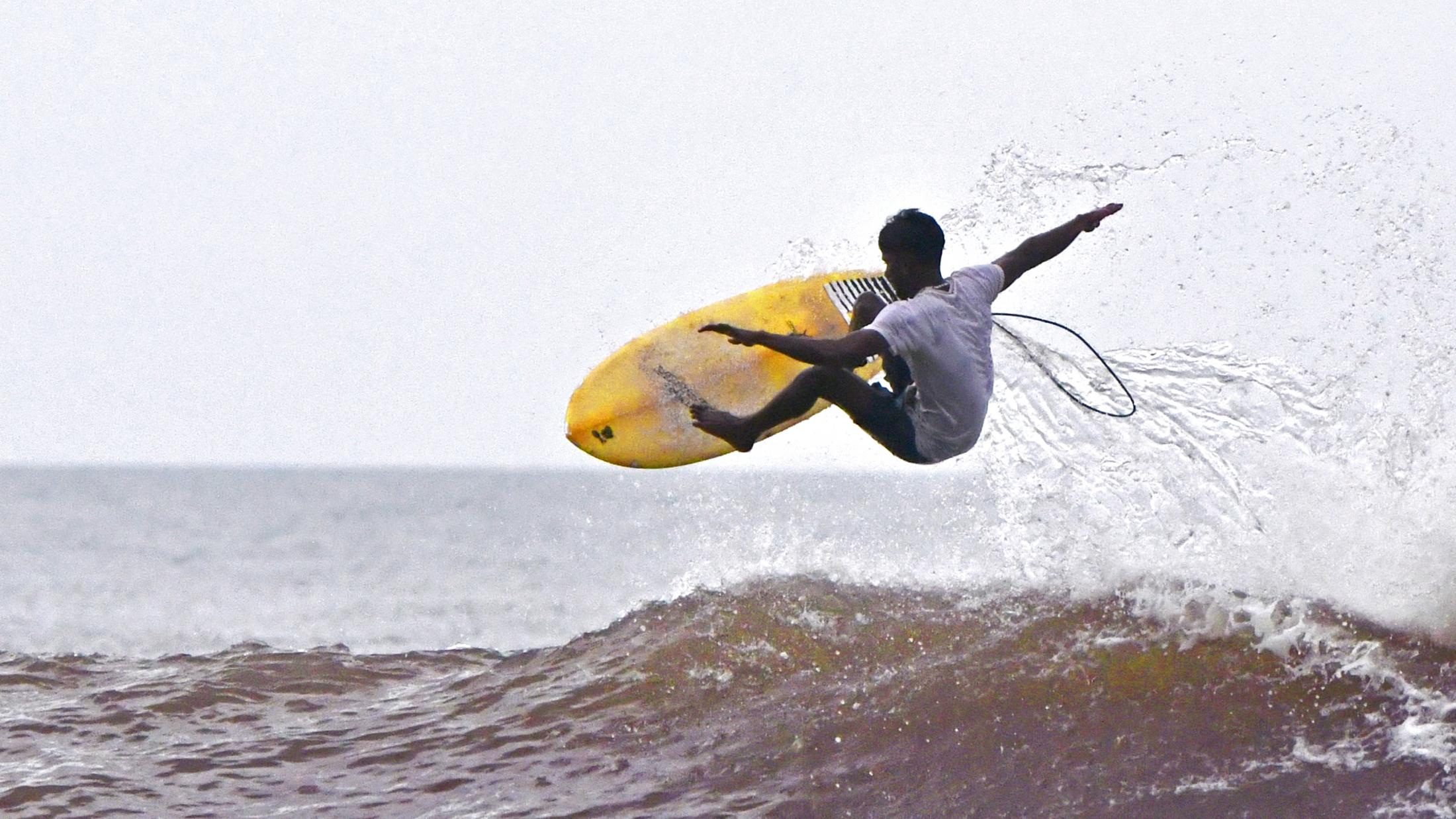 Nitish tries some aerial moves while practising for the upcoming competition.
He and his cousin Sanjay almost always surf together. He said, “Sometimes when I am sleepy, Sanjay comes and pulls me out of bed. And we go surfing. We always push each other to do better.” While their only access to a coach is the older generation who monitor them, they take the help of YouTube, photos and videos of their practice to improve their skills and do better the following day. 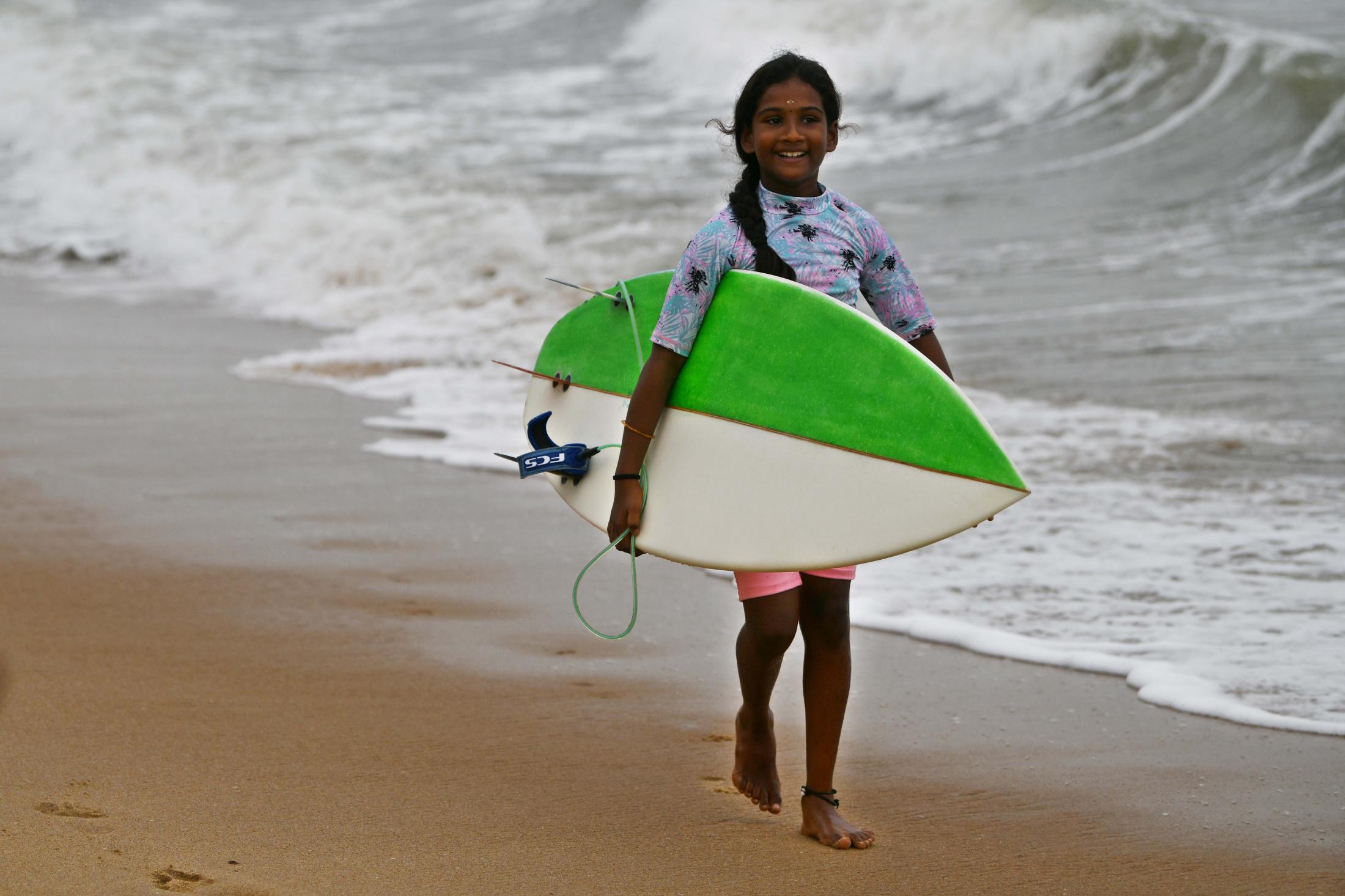 Kamali – (11) Is the only girl in town who skates and surfs. She started when she was eight and trains under her uncle Santosh who is a first-generation surfer. Even as a child, one could not contain the girl from getting to the sea. When her uncle isn’t surfing, she sits on the beach playing with dogs and watching other surfers. She said – “When I grow up one of the many things, I wish to do is be a veterinarian.” Her brother Harish started when he was three years old. Generations are started younger. 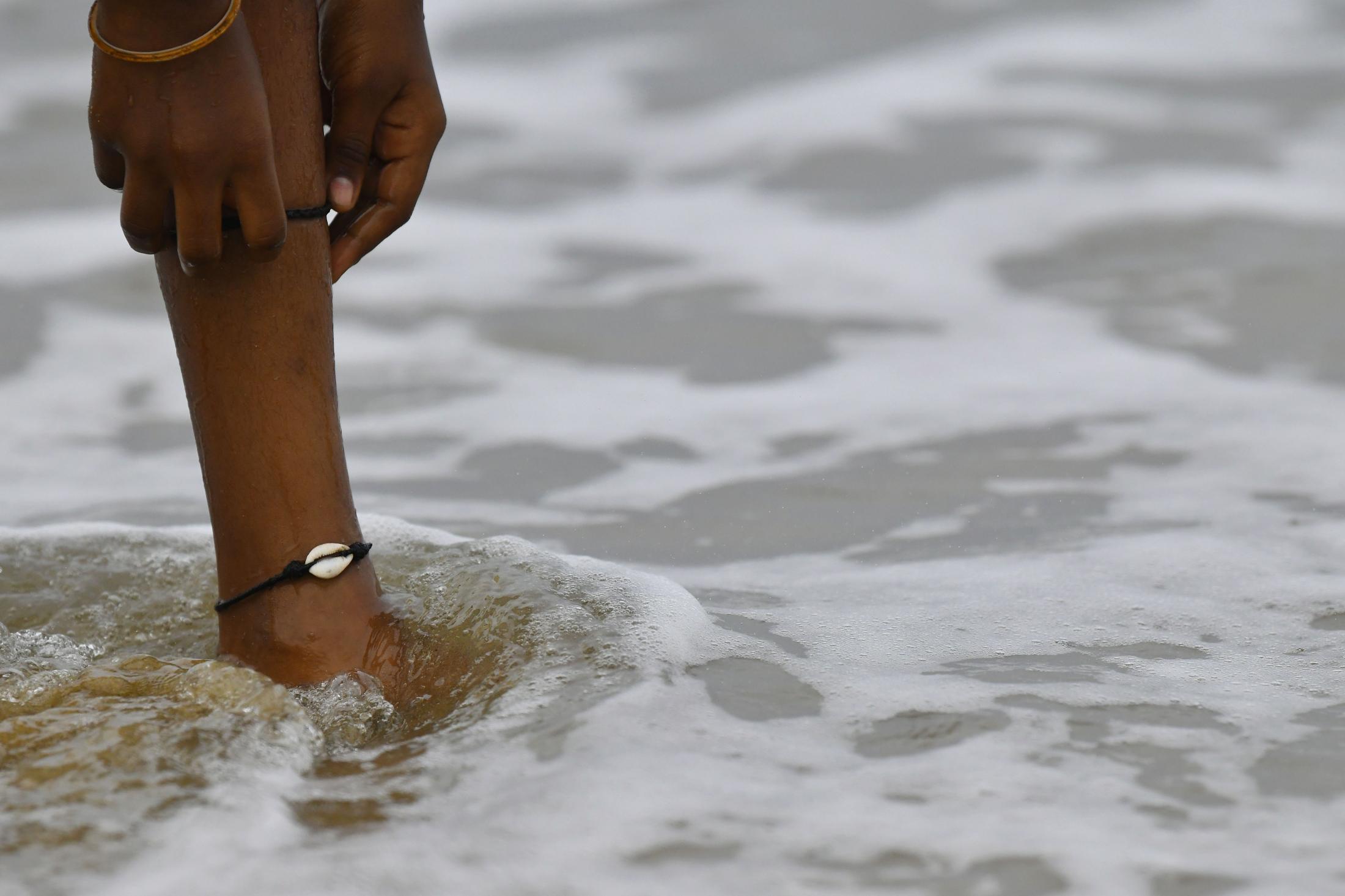 Kamali pulls up her trouser to show her anklet. Every surfer has a shell either around their ankle or neck. This is a sign of respect to the sea. Some also believe that this helps ward off evil eyes. 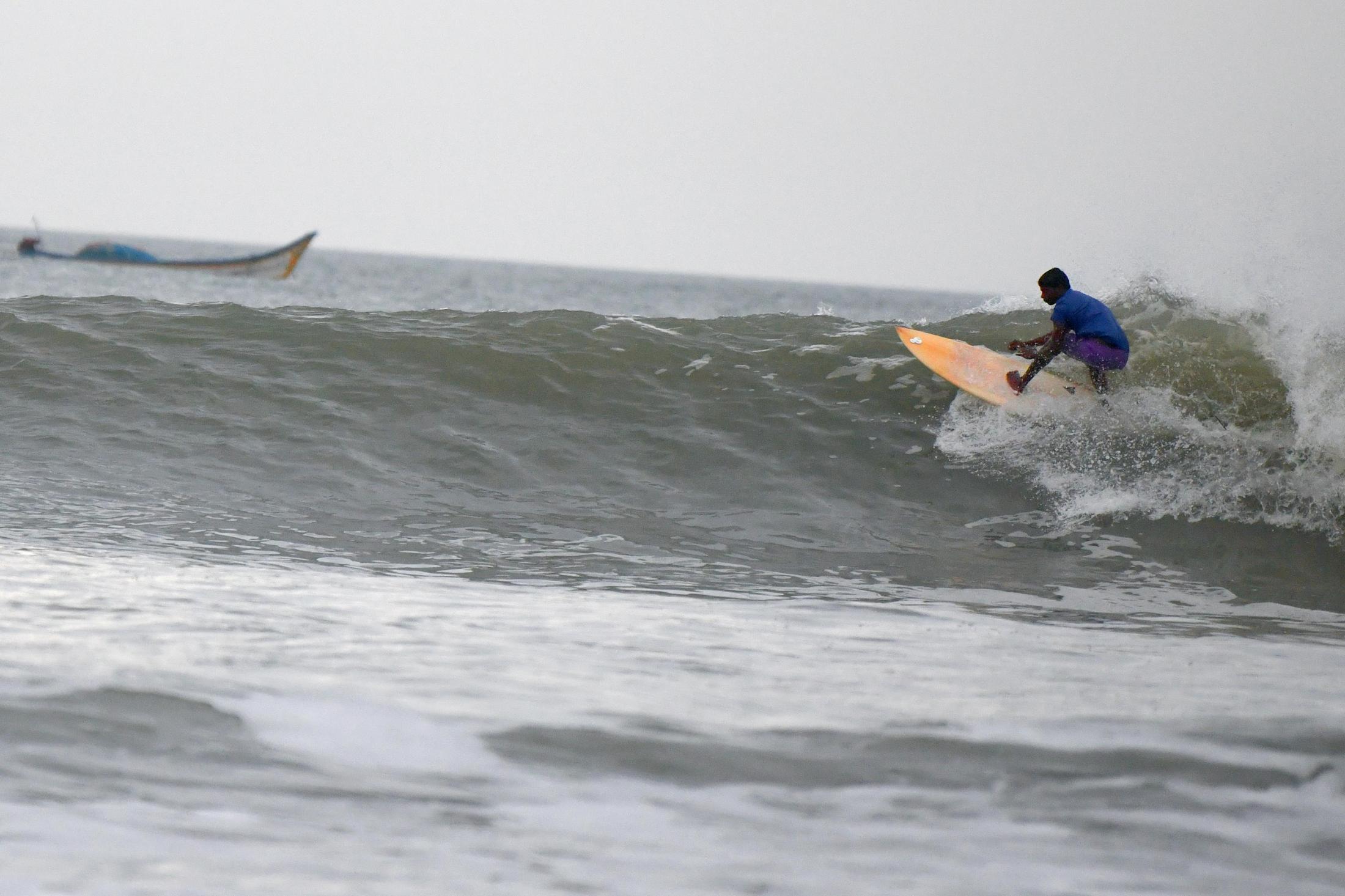 Lenin – (27) the barrel boy has just completed a barrel successfully. He is also called Kelly after his favourite surfer Kelly Slater. Mahabalipuram has been home for other boys as well. Lenin hails from an inland village called Mannargudi near Thanjavur. He moved to Chennai and worked in liquor stores which wasn’t a pleasant experience and his uncle suggested that he moved to Mahabalipuram a safe place for a young boy like him. He works in Masala Café at night and spends the rest of his day chasing the tide. He said – “Surfing is like meditation, when I am in the water, I forget about everything, it calms my mind.” His dream is to teach skating to children back in his hometown and hopefully catch the humongous 50 feet waves in Hawaii one day.” Edy Rodrigues a surfer from Goa said – “This boy is a natural and known for catching barrels.” 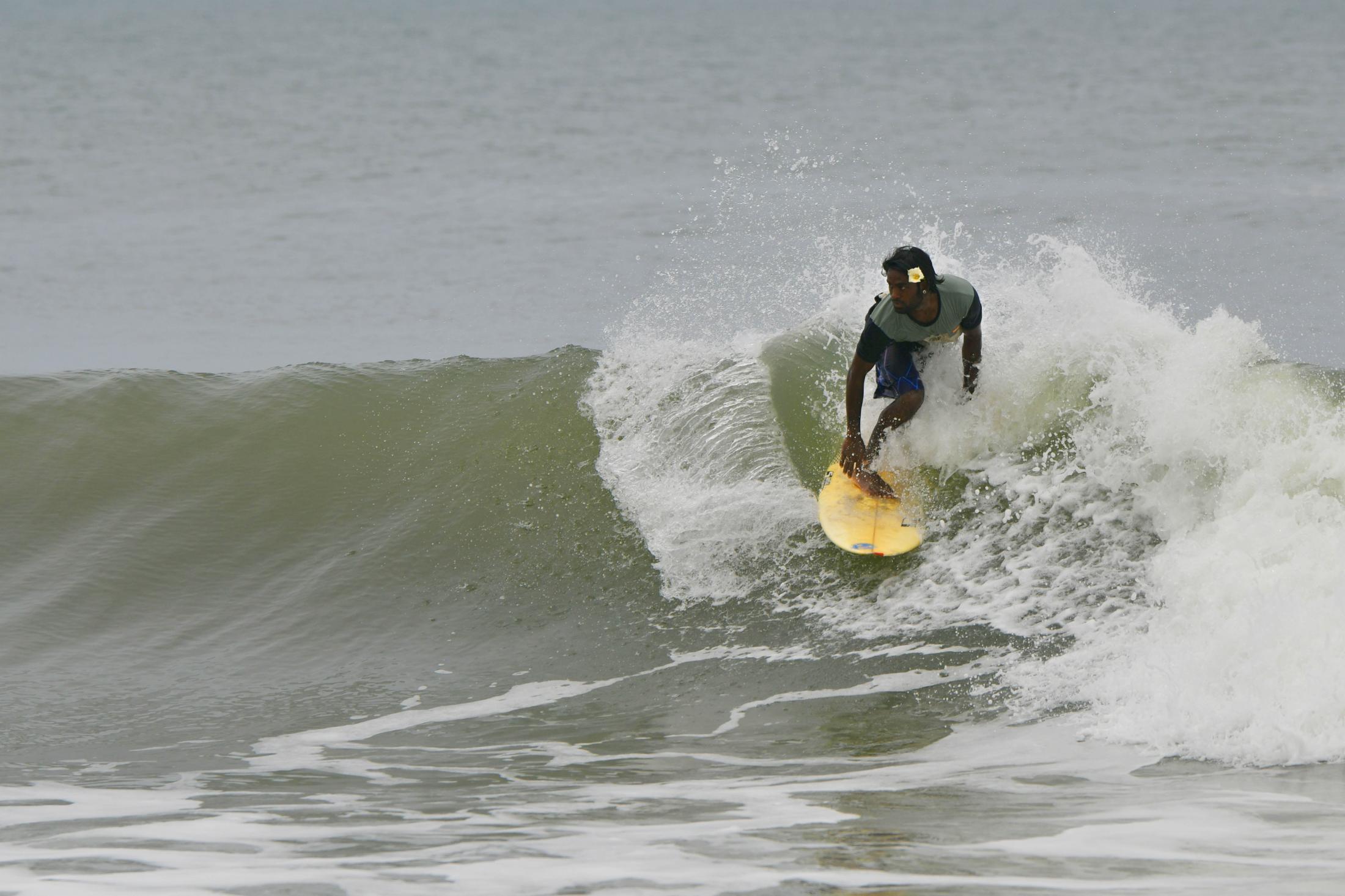 Appu – A man who studies the waves and sea life. He is not only a surfer but a certified rescue diver and a free diver. He said – “I can hold my breath for 5 minutes under water which helps me while catching a barrel. Any water sport you learn benefits the other in many ways.” Because of diving he understands marine life very well. When one spends time with him they are in for a lot of trivia. He said – “If you observe closely whenever a Dolphin is traveling south it means the sea is rough. It passed a few days ago and look at the waves right now, they are crazy but fun. Make a note of the date, time and other details, and come back exactly in a year and you will see them come back.” 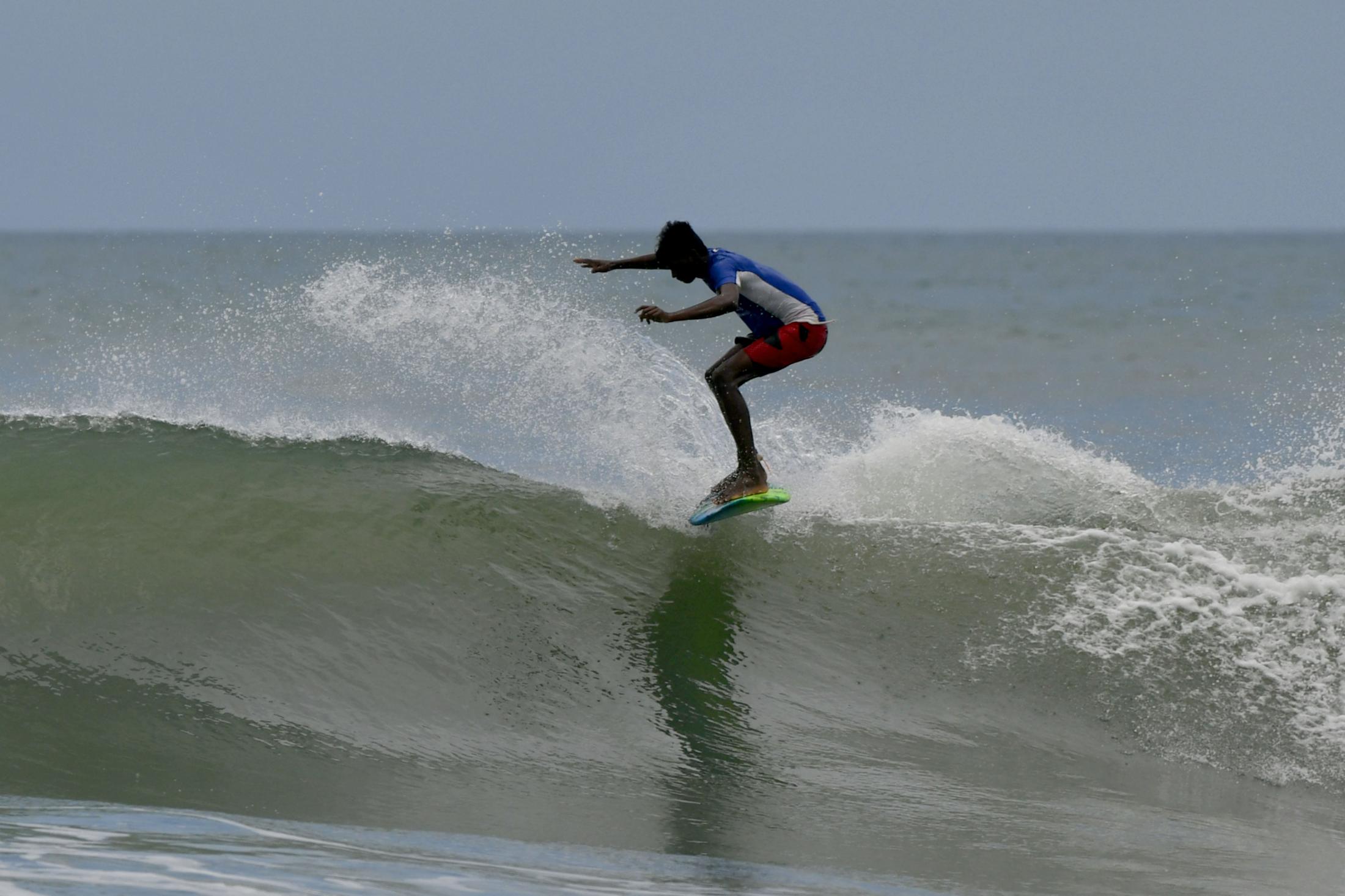 Ruban (18) – Started surfing five years ago. He, also like the other boys bought a second-hand board from his fishing money. He surfs whenever, he’s free before and after college. He’s currently studying BSc computer science. His dream is to take part in World Surf League someday.
Most of these boys dream of being able to surf in Bali or Hawaii one day. 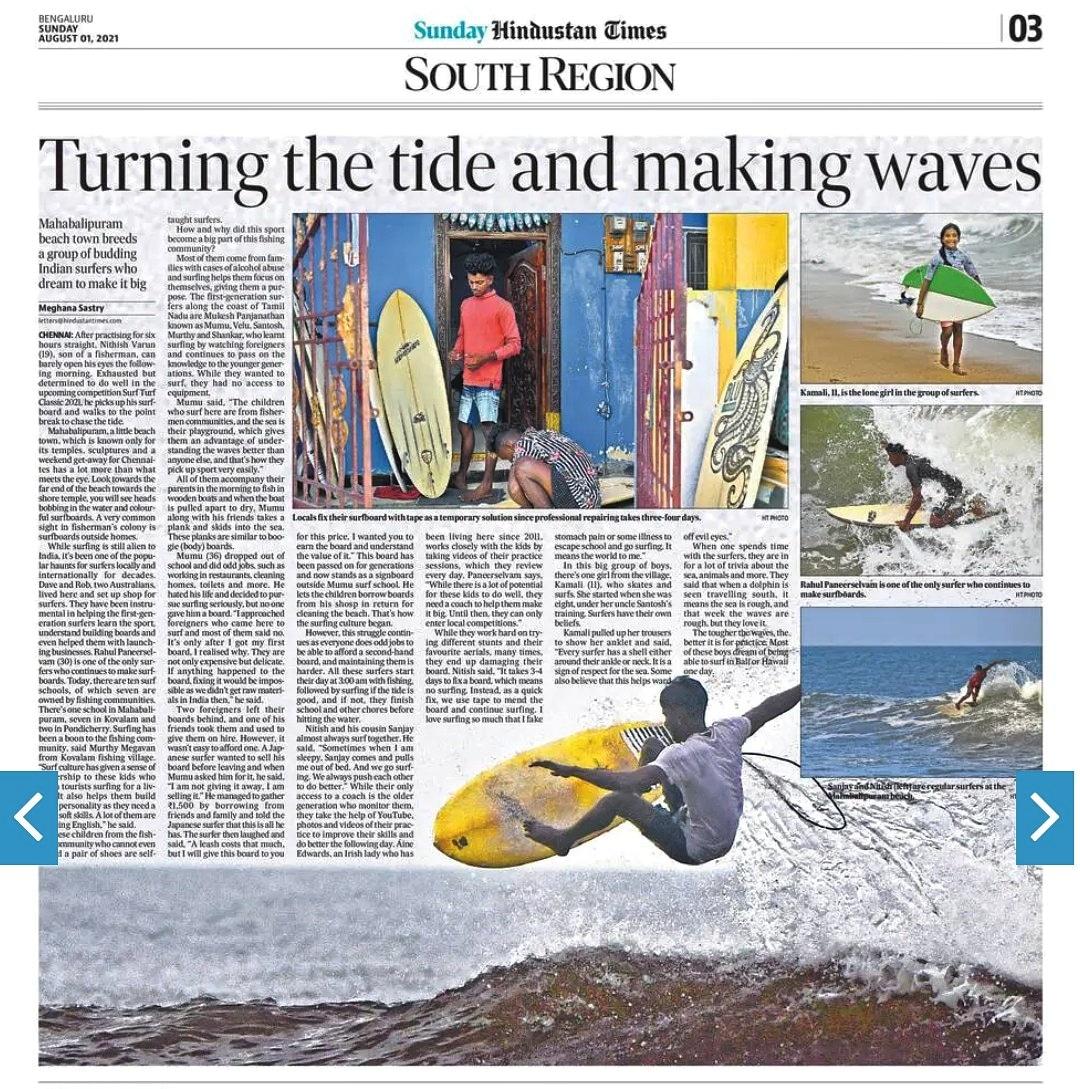